Drive down Washington Avenue in Endicott, NY and you will pass various shops, restaurants, banks, a movie theater and more. It seems like a neighborhood that is in the midst of a revitalization project. Across from a Florist whose façade stepped out of the 1970’s (or perhaps even earlier!) is The North Brewery. What started as a homebrew shop in July of 2012 has blossomed into a full scale brewery with its grand opening this past February. The brewery is run by Zach, his father Eric, and their brew partner Joe. Eric had been homebrewing for 25 years before he and Zach decided to move into the public eye.

Talking to Zach is a real pleasure. He is passionate about his work and proud of the beer he makes, as well he should. Currently they run off a 1.5 barrel system and have about 50 recipes to work with. Zach plans on having over 100 recipes by the end of the year! The brewery is looking to upgrade to a three barrel system in the near future which will certainly be a necessity for the diversity they are looking to create. All the beer is distributed locally for now, with some making its way over to Binghamton. Zach’s favorite styles to work with are stouts which, unfortunately, were not available to taste when I was there. The most popular is Cerberus, a chocolate oatmeal milk stout. Of course, I will have to make a return trip in the fall to try this and more!

Zach is always looking for ways to use local ingredients. The North Brewery will be making a single malt

beer with malt from a nearby malt farm. They also utilize NY rye and hops from nearby hop farms. The brewery will even be using NY apples for another beer in the works.

As head brewer, Zach is strongly influenced by Dogfish Head, Southern Tier, Mikkeller, and many more. This eclectic mix of breweries leaves its mark in the wide range of concoctions that they produce here. Zach is not afraid to try new things and has a lot of fun making creative beers. In fact, he was even inspired by Genesee Cream Ale!

Zach has a degree in graphic design and comes up with all the labels himself. The main logo for The North Brewery depicts an arm holding a malt stirrer from the 1920’s. A friend originally thought the brewery should be called The North Side Brewery but when they realized they were not in that area of the town it was shortened to just The North Brewery.

The tastings are free for now because Zach believes the beer should sell itself, and I think it does! The location is well suited for them and the rustic interior reflects the brewing style that goes on here. They have a small area in the front that sells homebrew supplies though I foresee this taking a backseat to the main attraction of the brewery further in. The atmosphere of the brewery is very laid back and relaxed. The bar is big enough to support larger groups of people and you can easily see the brewing operation while trying your samples or buying beer. In the future they would like to start canning but in the meantime you can purchase the beer in growlers and growlettes. Growlettes are an excellent idea. They make it easier to enjoy higher ABV beers in smaller quantities, as well as give you the option to pick out two of your favorite beers as opposed to just one growler.

Here are the beers I was able to try with some information on each one.

The North Brewery is certainly a great place to go if you want to try unique and interesting beers. With so many recipes under their belt, there is something to please every palate. I for one will certainly be back with growlers in tow!

We had the opportunity to check back in on The North Brewery while heading downstate. It ended up being the perfect day to visit as the brewery was hosting a special event called “Revenge of the Stouts.” Seven dark, delicious beers were on tap ready to be sampled, enjoyed, and purchased. 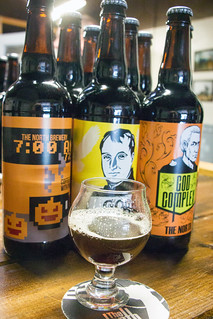 As on my previous visit, I was thoroughly impressed by the beer that The North Brewery creates. As a big fan of stouts and porters, I was in my element here. Zach has hired another brewer, Kyle Acenowr, who has taken up the brunt of the brewing. Kyle prefers to make IPAs, and in the summer offered up nine different beers, all with the same malt blend but different hops. Zach’s preference for Stouts and Kyle’s love of IPAs will be evident in the new recipes the brewery is coming up with. For example, they are producing three “hop stouts” which is a style I don’t see too often.

The North Brewery continues to expand at a rapid pace. They are getting a new five barrel system and hope to be canning by next summer. Zach also plans to distribute their beer further throughout the region soon. One other change is that there is now a tasting fee of four dollars to sample the beer. This was put into effect to deter patrons from stopping by just for free beer. However, the cost of a tasting goes towards the fill-up of a growler.

I wish The North Brewery continued success and look forward to future visits to see how they evolve with a new brewer on staff! I love their stouts and was glad I could take some back to Rochester with me.

We made sure to sync up our travels to the Binghamton area of New York with The North’s yearly celebration of dark beers, Revenge of the Stouts. The brewery was hopping but we found a spot at the tasting bar to enjoy the latest from Zach and company. 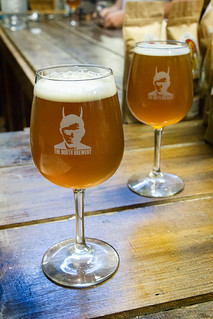 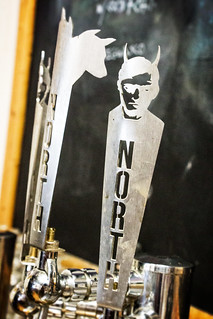 After trying an incredible selection of beer, we felt it best to stop back the next day as the throngs of fans made it a bit more difficult to discuss the brewery and take photos. The next morning, things were quieter at The North and we managed to chat with Zach while enjoying a pint of their latest IPA, Tears for Harambe.

The North is now running on a 5-barrel system but have a 10-barrel output. Zach says they are currently running at 80% efficiency but when they get to 100% they will be producing 15 barrels of beer per week. 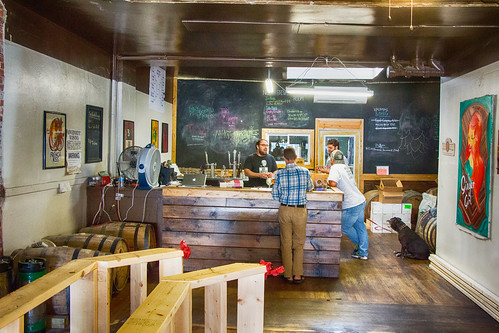 Zach and his brewers have been developing even more barrel aged creations and have nine barrels dedicated just to make sour beers. Most barrels come from the Smith Bowman distillery in Virginia but a few are from Jack Daniels as well as the Hidden Marsh Distillery at Montezuma Winery. Renovations in the tasting room will give them even more dedicated space for barrel aged beer production. 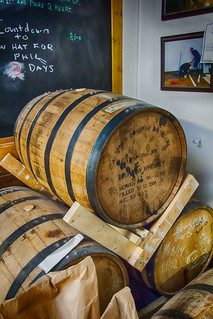 Speaking of renovations, the new tasting bar was about to be built when we visited. The new bar allows more people to gather around to socialize and provides some much-needed table space. Zach has also installed a TV but not for sporting events. He wants an atmosphere where people go to talk to each other and not just be glued to the latest televised game. As such, groups of gamers visit on a weekly basis to hang out and play different board games while enjoying the latest concoctions.

Having already earned two gold medals at Tap NY, The North has taken on a huge following of devotees both locally and from afar. They now have a mug club with various tiers that offer discounts, free bottles of new releases, and more. There is even a lifetime membership available by invite only. The three levels are Follower, Cultist, and Elder; names no doubt inspired by H.P. Lovecraft!

For those of us who are not lucky enough to live near the brewery, The North has signed up with Rhino Beverage Distribution out of Rochester, NY. Much of what Zach and his team create is now available at bars, restaurants, and stores in expanded markets around the state. I’m excited about this as it saves me from a two-hour drive to get their beer. Unfortunately, most limited release beers will still only be available at the brewery. 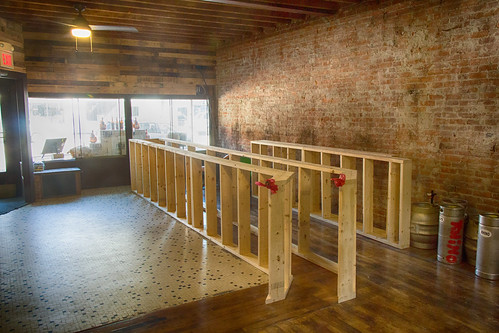 I always love getting back to The North for their many unique and well-made beers. Zach and his crew love creating new recipes, and the ability to bring together the local community has been very positive for the area. With additional bar space, and expanded distribution, The North Brewery is no longer one of New York’s best kept secrets and will continue to attract new fans from all over the country.

I’ll leave you with some fun facts about Endicott, NY. It was founded in 1892 by Henry Endicott, a member of the Endicott Johnson Corporation shoe manufacturing company, and was known as the “Home of the Square Deal.” It is also the birthplace of IBM way back in 1911 when it was called the Computing Tabulating Recording Company. What a mouthful!