Many people would be hard-pressed to find Chester, NY on a map, but Rushing Duck Brewing Company is hoping to change all that. Tucked away off Railroad Ave, in a seemingly out of the way building, you may have trouble finding the brewery. However with a bit of persistence, and the help of a GPS, this hidden gem will make itself known.

For head brewer, Dan Hitchcock, his interest in beer making goes back to his homebrewing days while in college, looking for a better beer. In conjunction with the pursuit of his Political Science degree, Dan also applied to the American Brewers Guild for the Intensive Brewing Science and Engineering degree.  While still studying for the Brewers Guild program, Dan worked at Weyerbacher Brewery for three years, and soon was promoted to head brewer. The idea of owning his own brewery appealed to him and after over a year of planning, Rushing Duck was born. The brewery officially opened in August of 2012 and has become a destination for local beer fans.

Currently, Rushing Duck Brewing Company is running a 7 barrel brew house. This August, Dan plans on doing limited releases in bottles. For now though, you can find their beer at various restaurants and bars around the region as listed on their website. At the brewery itself you can buy growlers, or bring your own to have filled. For those that are frequent buyers, Rushing Duck offers a growler club card.

When it comes to brewing, Dan enjoys making whatever is newest. This means that you can always expect to see new recipes coming out on a fairly frequent basis. A bourbon barrel series is being introduced this August and he is planning a Brettanomyces yeast series as well. Dan embraces the sour beers and is not afraid to experiment with them. I am looking forward to the Bourbon Barrel series as I love what barrel aging can do to a good beer. Rushing Duck is working with a local supplier, Warwick Valley Winery and Distillery, for the barrels.

Rushing Duck is actually named after the metal buckets that Dan’s grandfather used to fill with beer while playing cards with his buddies. Whenever they were out of beer, someone would have to rush down to the bar and fill the “duck” with beer again. Hence, the term “Rushing the Duck” was born. It is a nice homage to his family history in Hoboken, NJ. As for the beers themselves, Dan admits that most of them were named while hanging out with friends around the campfire.

The most popular beer he produces is Naysayer; a pale ale with strong hop characteristics. It is one of three year round beers they produce along with Beanhead Coffee Porter, and Nimptopsical Ale. My favorite was the porter as I am a huge fan of most beers that involve coffee!

Here are the beers that were on tap while I was there and some of my thoughts:

If you find yourself heading down Route 17 in New York, I highly recommend getting off and stopping at Rushing Duck Brewing Company. The beer is well made and there are always some adventurous new concoctions to try as well. The tastings are free and the growler fills are fairly priced. You can also purchase pint glasses and t-shirts. Judging by the consistent flow of people that passed through the door during my visit there, I predict that they will do very well in years to come. I am hoping to seeing Rushing Duck’s beer distributed into new markets, especially with the potential to start bottling.

Revisiting Rushing Duck Brewing Company was a fun experience. The tasting room was packed, the beer was flowing, and everyone seemed to be having a good time. 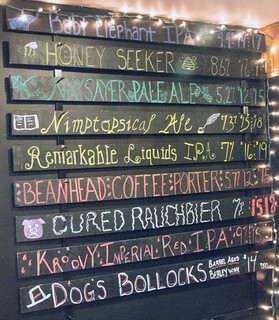 Once again, it was hard to find parking due to the popularity of the brewery and limited parking in front of the building. However, there is also a public lot not too far if the brewery’s parking area is full. Tastings are still complimentary and include six samples per person. Rushing Duck now bottles four of their beers for distribution. They also have over 200 accounts including many locations in New York City. Be sure to grab a growler club member card; once you purchase ten growlers, the eleventh is free.

I am glad to see that Rushing Duck is doing well. The beer selection tends to be higher in alcohol, but all are well balanced and bursting with flavor. I’m looking forward to the day when they are distributed in Rochester, NY.

Rushing Duck Brewing Company always produces some interesting beers and I was excited to stop in on Christmas Eve to see what was new to try. We managed to get in shortly before they closed for the day and Nikki happily helped us with the sample flights. 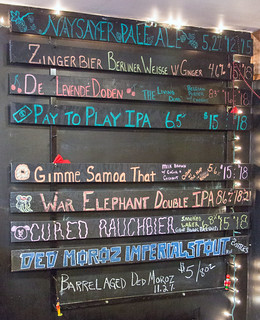 As always, the beers that we tried at Rushing Duck were fantastic. They certainly have a penchant for doing more off-the-wall and non-standard recipes. My favorites today were Gimme Samoa That and the Ded Moroz aged in Bourbon Barrels. For those who have the time, Rushing Duck has added in more tables and chairs so you can relax there and enjoy a pint or two. I love this option and it appears that the regular visitors do as well.

According to Nikki, the brewery just installed a new 15 barrel system that will be up and running by the end of January. This will help them to increase distribution in their current footprint. I can only hope that they soon spread the wealth to reach more of New York State. Before we headed out the door, we were also lucky enough to meet James, the brewery cat. James is in charge of keeping all undesirables out of the facilities and we were told he does a great job at that!

I look forward to my visits at Rushing Duck. It makes a great stop while traveling through this region and always offers a diverse selection of beer. I highly recommend a stop here if you are nearby!

I mentioned that Nimptopsical was actually a word made up by Benjamin Franklin earlier in this post. Way back in 1736, Franklin published an article called the “Drinker’s Dictionary” in the Pennsylvania Gazette. It was one of the many words he had listed that were synonyms for a drunk person. So the next time someone says you have had too much to drink, tell them you are just nimptopsical!