Just thirty miles north of New York City, in the quiet little town of Pearl River, one can find Defiant Brewing Company. Defiant has been around for seven years and has something to offer everyone. They are easily found and are located right near a railroad station for those looking for alternate transportation to get there. While visiting, I had the opportunity to talk to one of the friendly staff members who shared a bit of information on the brewery.

Neill, the brewmaster, had actually worked at a few other breweries before opening Defiant. While at the breweries, he noticed that a sense of greed pervaded the industry. Lower quality ingredients were used to save money, resulting in a lackluster beer. Wanting to change all that, Neill opened his own establishment. In “Defiance” of the other brewers he worked with, Neill could now get the ingredients he desired and not compromise the final product. That is the philosophy behind the beer they produce.

Defiant Brewing Company opened in Pearl River because of Neill’s Irish heritage. There is a huge Irish population in town; in fact, they have the second largest St. Patrick’s Day parade in New York! Neill is proud of his background and this location allows him to give back to the community.

Along with the brewery, Defiant has an onsite Smokehouse. Walking into the building, the smell of smoked pork and ribs tantalizes the senses. If we had not already eaten, a plate of barbecue would have been in order! Defiant partners with Stone Barn Farm to source many of its ingredients locally.

The beer is currently available both at the brewery and throughout the metropolitan New York area. For now, Defiant just self-distributes its beer. Within the last six months they also started selling in Central New Jersey. They are getting a bottling machine up and running to offer six-packs as well in larger quantities. Currently they do small batch bottling of the Christmas and Belgian Triple for purchase at the brewery itself.

When you visit the brewery, please bring cash. They do have an ATM machine in the back but be prepared for a $4.00 service fee. Also, Defiant does not sell sample flights. Rather, you have to purchase your drinks individually as 8 ounce pours. This is not very convenient for those of us who wish to try a broad spectrum of all they have to offer. Originally they had 4 to 5 beers on tap but that number has increased greatly. Defiant has a 15 barrel brewhouse so expect to see a lot of fluctuation in terms of what they have on tap at the time of your visit. They tend to produce a lot of lagers as Neill’s forte is Germanic style beers.

The bar / restaurant is quite large and all the brewing equipment is visible along one wall. The staff is very friendly and quite helpful with the beer recommendations. The most popular beer Defiant produces is the Muddy Creek Lager. A new non-beer for Defiant is a “training wheels” orange cream soda. We did not have a chance to try this as we didn’t want to run up too large a tab!

Here is what we were able to try as we were not able to do a full flight of their beers:

Defiant Brewing Company is a good place to go if you are looking for dinner and a beer. However, if you are traveling through the area hoping to try an assortment of their beers before deciding what to take home, the setup is less than ideal. I disagree with breweries that are not willing to sell flights as I really think that is the best way to showcase the beer and let people see the diverse range of products. However, Defiant’s current business practice appears to work nicely for them. I wish I had the chance to try more than two beers as one was quite good but the other was average at best. I guess this is what return trips are for!

With hungry bellies in tow, we made our return visit to Defiant, eager to try some of their barbeque and beer. As on our previous visit, Ben was there with his quirky sense of humor, ready to help us with any questions we might have had.

Since our last visit, Defiant now offers some of their beer to go in bottles. Muddy Creek and Medusa are available in 6-packs and the Weapons Grade IPA comes as a 4-pack. It is nice seeing more of their beer available in bottles for those not ready to commit to a growler. I also noticed that they have hats and t-shirts for sale. 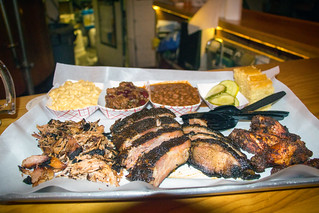 The beer was decent, but the barbeque took center stage on this visit. We tried the Ample Sample which is more than enough food for two people. You may find yourself needing to take home leftovers as well. The meat was perfectly cooked and moist, while the seasoning was flavorful without seeming overly salty. The side dishes were also well made. We certainly were not hungry by the time we left!

I am glad to have returned to Defiant to try more of their beer and food. While I found the barbeque they serve to be perfect, I still haven’t found a beer there that really amazes me. When you only can order pints, it is hard to sample a wide selection of their offerings. Perhaps on future visits I will find one that hits the mark for me!

Not only does Pearl River host the second largest St. Patrick’s Day Parade in NY, but it has quite a few other Irish cultural activities as well. You can go to the Pearl River School of Irish Music and learn the flute and tinwhistle. The town is also the home of the Inishfree School of Irish Dance. Time to get your Riverdance on!