If the name Barrier Brewing Company sounds familiar to you, it could have something to do with Hurricane Sandy. When Sandy hit the eastern seaboard in 2012, it devastated thousands of people, destroyed homes and businesses, and cost millions in damage. Located in Oceanside, NY on Long Island, Barrier was hit hard and lost much of its equipment and supplies. However, after months of rebuilding, and the support of the craft beer community, they are back up and running. While on a recent trip, I managed to visit the brewery, try some beer, and learn more about the place.

Barrier Brewing Company was opened in 2009 by Evan Klein. Evan originally started at Sixpoint Brewery in Brooklyn. Actually, everyone who is currently working at Barrier started their careers at Sixpoint! After Hurricane Sandy, it took Barrier about three months to rebuild. During that time, they worked with Brewery Ommegang on a collaboration beer called Barrier Relief Ale. The proceeds of the beer sales helped to get Barrier back on their feet in a shorter amount of time.

Besides collaborating with Ommegang, Barrier has also used other local ingredients and suppliers. One beer, Hoplantic Harvest Ale, is made with fresh hops from an upstate NY farm. They hope to continue to use locally sourced products in the future. The most popular beer right now is Money, a west coast style IPA. This is no surprise as the guys at Barrier love to work with hops. Their favorite styles to produce are IPAs and Pale Ales. Currently, Barrier has a five barrel brewing system.

Evan grew up in nearby Long Beach, NY. Long Beach is a barrier island; hence the name of the brewery. Many of the beer names refer to surfing terms or ocean living. Barrier has no plans to sell their beer at stores but they do distribute to bars and restaurants around southeastern New York State.

Visiting the brewery is an interesting experience. You walk into a huge open warehouse filled with brewing equipment.They have a small bar area where you can sample the beer before buying it to take home. Barrier even has a small “lounge” area where the brewers and customers can just relax. The brewery typically has quite a lot on tap and that was evident when we visited. Barrier is constructing a larger tasting room off the brewery floor which will help separate the production and sales environments. Currently they only take cash but will be soon be accepting credit cards, hopefully in time for the tasting room to be open. They sell growlers and kegs but will also have other merchandise available in the new tasting room. Be sure to check out the fun tap handles while you are there!

Here is the list of beers I had a chance to try while at Barrier Brewing with some of my thoughts on each of them.

With 47 beers on rotation, Barrier almost certainly has something for everyone. Be sure to bring a growler to have filled or pick one up while there. They do sell some limited edition bottled beer so be on the lookout for those as well. Barrier Brewing Company is well worth your time to visit. They make a diverse range of excellent beers that are unique and interesting.

Tim and I were back on Long Island recently and had the chance to revisit Barrier Brewing Company. The brewery now has a spacious tasting room that opened in September of 2013. It is quite an upgrade from their previous tasting area; good sized bar, tables, and interesting artwork on the walls. The sampler flights they offer are $10.00 each and allow you to try five of their beers. If you want something more substantial, ten ounce pours are also available.

Barrier Brewing also has some fun new activities on different nights of the week. On Wednesdays, flights and growler fills are all half price. Thursday nights, the tasting room serves up free hot dogs! Finally, Fridays are Cask and Concert nights, during which the brewery brings out a cask of one of their beers while a concert DVD is played on the large screen for the enjoyment of the patrons. Even if you can’t make it in for one of these special nights it is still fun to check out anytime they are open. The brewery always serves free popcorn to munch on while tasting your beer which is a nice touch. And finally, the tasting room sells grumblers and growlers in case you forget to bring your own and want to make a purchase. Remember though, they are still a cash only business for now. Here are the new beers we were able to try on this visit.

As you can see, Barrier Brewing always has something new and great to offer. With over 60 beers in rotation and contract brewing for some restaurants in New York City, there is a lot going on. It is great to see that the brewery is always innovating and pushing itself to even higher standards. At TAP NY this year, each beer they had available for sampling was a smoked beer, and all were delicious and well made. I look forward to return visits and hope that one day, their beer will make its way to the shelves of Rochester, NY!

Being back on Long Island for a wedding, we wanted to stop into Barrier to see what was new to try. Once again we were greeted by their very friendly and helpful staff, ready to serve us up the latest news and a flight of their available beer. 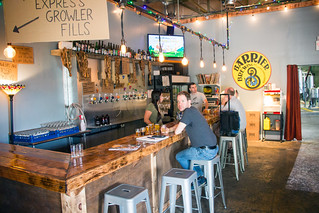 Once again, I am impressed by the quality and diversity of beer that Barrier continues to put out. I especially enjoyed their Cask Atlantico and the Belgian Strong Ale. I keep hoping that they will eventually be distributed in upstate New York. 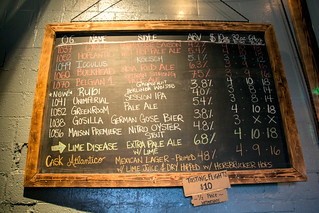 For those who were looking forward to free hotdog Thursdays, I hate to disappoint but they no longer do that. However, it has been replaced by Thursday experimental beer nights! This means that every Thursday Barrier offers up a small one-off batch of unusual experimental beers. This is an excellent idea that I wish more breweries would adopt. It would certainly entice me to visit them weekly! Finally, the brewery now plays host to a food truck, Poseidon’s Kitchen, which serves up fish tacos, burgers, and more to the hungry visitors.

Barrier Brewing Company continues to impress me. I feel this is probably one of the go to beer destinations if you ever find yourself on Long Island. You will not be disappointed by the caliber of beer, and the friendliness of the staff. This is a brewery experience that many other breweries strive for, and keeps me thirsting for more.

During a recent trip on Long Island, an obvious destination for us was Barrier Brewing Company as it is one of our favorite breweries. On previous visits we have gone to the brewery right after they opened. However this time it was late afternoon and the place was hopping! Robyn and Chris at the tasting bar got us set up with our flights. Even though we have been there many times, there were still plenty of new beers on tap for us to try. 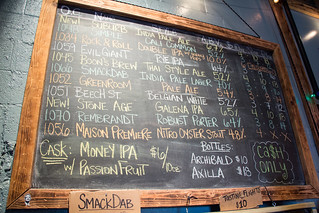 Today’s visit had us trying a lot of beer styles that we don’t typically gravitate towards. They were all well-crafted, and will please many different beer drinkers. My favorite was the double IPA, Rock & Roll, as it was quite full bodied with a rich, tropical flavor. It pleases me to see Barrier putting out so many different varieties of beer. As a reminder, flights are still $10.00 to try 5 beers and they are a cash only business. Luckily, there is a grocery store with an ATM just down the road.

It seems that every time we go to the brewery, the focus of Thursday evening’s changes! Experimental beer night has been replaced with a raffle night. There is a beer of the hour and for every pint of it purchased, you get a raffle ticket. At the end of each hour, a winner is picked for a free growler, bottle, flight, or more! This goes on through the evening, giving multiple people a chance to win prizes all night long.

I have had the opportunity to try over 33 unique recipes at Barrier over the course of my four trips to the brewery. Each time I visit, there is always something new and unique to try. I am envious of those who live near the brewery, due to its extensive line-up of beer and the fun weekly events. I will stop in again the next time I have a chance to be back on Long Island.

No trip to Nassau County on Long Island is complete without a stop at Barrier Brewing Company. Walking into the tasting room, we were greeted by Ann who was ready to showcase the new-to-us brews that were on tap. Grabbing some complimentary popcorn and a seat, we tried the following beers. 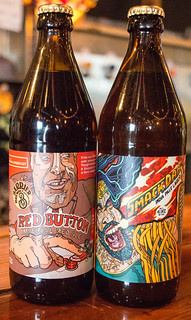 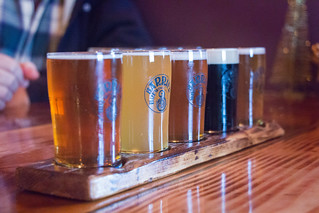 Not much has changed at the brewery since our last visit which isn’t necessarily a bad thing. It still has the same relaxed atmosphere, and a food truck sits outside ready to take your orders. If you find yourself here on Wednesday nights flights are only five dollars, half the normal cost – a great deal.

Behind the scenes, Barrier has added their own bottling line. This has allowed them to increase distribution throughout Long Island and Westchester County with an outside company. They still distribute the beer themselves to Manhattan and Brooklyn.

I can only hope that with the addition of a bottling line and signing up with a distributor, Barrier will soon be available in my neck of the woods. Barrier has been exhibiting slow but steady growth, and I feel like they don’t want to rock the boat and extend their reach too far, too fast. In my opinion, a wise decision that I’m sure will pay off in the long run. In the interim, I will gladly stop in on future visits to the area to taste and purchase some of their great beer to bring home with me.

Oceanside is a city on Long Island, the largest and longest island in the contiguous 48 states. It is 118 miles long and is home to over 40 wineries, 15-plus breweries, and a few distilleries. In the future I plan on returning to get the full scoop on some of these other great sites!