Sackets Harbor, New York is well known to American history buffs as an important area of defense for the United States during the War of 1812. Since 1995 the town has also played host to Sackets Harbor Brewing Company. I had the opportunity to talk with the staff regarding this fine establishment.

Sackets Harbor Brewing Company and pub are located within an old train station in a fairly trendy part of the town. The interior is filled with dark wood paneling yet is warm and inviting. Off to one side of the bar area you can check out the brewery itself through some panes of glass. Jonna, the bartender, has an extremely bright and chipper personality and goes out of her way to make you feel welcome during your visit.

The brewery has a diverse selection of beer on tap, and you can get a tasting flight of all of them for $13.50. This may seem expensive but they are very generous pours and are perfect for sharing. The beer flight comes out on a unique wooden train, another reminder of your location. Here is a list of what we were able to try the day we visited with some notes about each beer.

I was really impressed by the diversity of beer and the quality of each one. There were very few that I did not care for. The brewmaster, Andy, was even able to share a few moments of his time to discuss the beer. Andy originally got his start at Empire Brewing in Syracuse, NY. Being out on his own has really given him a chance to shine and make some diverse and excellent beers. He brews off of a seven barrel system in house.  Andy is also growing hops right on site which I don’t often see at breweries. He also tries to use local ingredients when possible. For some beer, such as the Amber, they contract brew at Sly Fox in order to meet demand for the product outside the local area. The 1812 Amber is their most popular and is available at many locations outside Sackets Harbor.

The brewery and pub is often very busy and has become quite popular. They have a full service restaurant with tantalizing selections, most notably the Duck Nachos. The leftover beer mash from the brewing process is used to make bread which is served at the pub. While the prices might seem a bit high, it is par for the course when the business is located in a very touristy area. Half pints are available if you want to try more of a certain beer without going for the full pint.

Sackets Harbor Brew Pub really knows how to cater to the beer lover. For example, they have nice write-ups on all their beers with technical details so you can learn more about the ingredients as well as additional information on the style. One of the things the bartenders will do is to combine the 1812 Light with the wheat beer so as to cut back on the floral aromatics for those who find them too strong. I admit that this did make for a much more palatable drink. Another combination they concocted is whipped cream Vodka with their Stout; creating a drink akin to a barrel aged beer. I was impressed by the possibilities.

If the weather is nice, you can also eat outdoors. The pub features a full service bar and a large selection of wines, though sadly nothing locally produced was on the list. Sackets Harbor brewery also sells merchandise like logo pints, T-shirts, and growlers.

I was thoroughly impressed by Sackets Harbor Brewing Company. The selection of beer is excellent and well made. If you have the time, grab a bite to eat such as the very flavorful Duck Nachos. They even make a great root beer for those who don’t drink alcohol. I look forward to stopping in again the next time I pass through the area.

Driving through the region on the way to the Adirondacks, Tim and I decided to check in at Sackets Harbor Brewing Company to see what was new and interesting. Once again, Jonna was there to greet us with a friendly smile and give us the inside scoop. She is well liked by all the restaurant patrons, and her personality really shines when talking about the brewery. There were four new beers on tap to try that were not available on our previous visit.

We enjoyed the beer samples that we tried and I especially liked the Battlefield Brown. It is a shame more breweries do not put darker beers on during the summer months. The brewpub now offers a smaller beer flight that holds four samples in a metal rack. This is very convenient for those who want to try a smaller selection of their rotating tap lineup. Another new addition is the weekly release of a firkin. These typically come out on Fridays and disappear very quickly due to their popularity.

The brewery is now bottling some of their beer, which is great for consumers who want an alternative to growler fills. Both the 1812 Amber and the Thousand Island Pale Ale are available for purchase at the brewpub and various local stores in this convenient format. I can only hope that they decide to bottle more styles of their beer and distribute them to retailers in other parts of the state.

Sackets Harbor Brewing Company continues to produce consistently good beer. I am glad to see they are expanding and offering their beer for sale in bottles. As always, it is a pleasure to stop in, grab a bite to eat, and sample some great beers.

On our annual trip to the Adirondacks, we make it a point to stop in at Sackets Harbor to see what new and interesting beers are on tap. Today there were a handful of different varieties to try before continuing our journey. Danielle at the bar walked us through the flight. 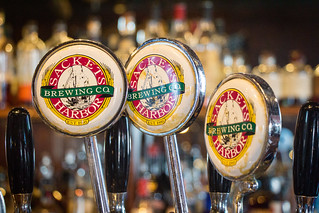 I was surprised at the concentration of German style beer on tap today but wasn’t complaining. As always, the selections were varied and delicious. My favorite was the Sackets Alt as I thought it was very true to style and well made.

According to Danielle, not much has changed since we last visited but that isn’t necessarily a bad thing. The bar has been expanded slightly to make room for some local ciders on tap. We tried two from nearby Critz Farms and they make for a great alternative when you are looking for something other than a beer.

I’m glad we make Sackets Harbor Brewing Company our yearly lunch stop on our way to the Adirondacks. They are producing some fine beer and I have never had a bad meal there. I can’t wait to return again next summer!

In case you don’t know your American history, here is a quickie on Sackets Harbor. After war broke out between the United States and Britain in 1812, Sackets Harbor became the center of naval and military activity for the region.  For most of the war, Sackets Harbor constructed and supplied naval ships, while also providing barracks for thousands of soldiers, sailors, and mechanics.