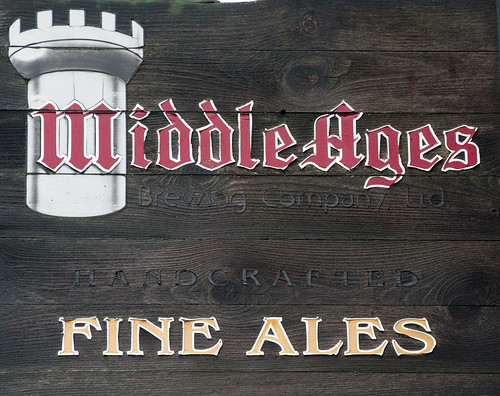 Syracuse, NY has room for plenty of craft beer makers so it is surprising to see how few currently exist. After having explored the newest brewery in the area, it was time to visit the oldest full production brewery, Middle Ages Brewing Company.

First opening its doors in 1995, Middle Ages Brewing Company is proud to produce ale heavily influenced by British brewing traditions. When we arrived at the brewery it was jam-packed with people. Thirsty Syracuse University basketball fans had stopped in to taste beer and purchase growlers and six packs after the nearby game finished. Luckily, we were able to find a spot at the tasting bar to sample their offerings. Here is what we were able to try on this visit. 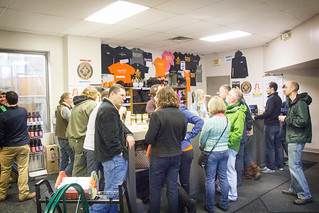 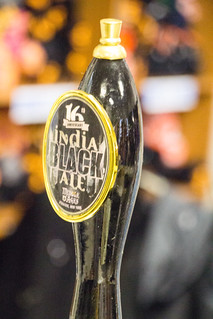 The first thing I should mention is that the tastings are complimentary. By the time you sample their generous pours, you end up drinking about 2 and a half pints! I feel like this is the reason a lot of basketball fans come here as unfortunately there appeared to be more drinking then actual purchasing of beer. I am still a fan of free tastings though as I feel the beer should sell itself and compel you to purchase some to take home.

The brewery is located in the former Sealtest Ice Cream Factory. It is a fun, historically significant location and certainly makes good use of space without having to erect new buildings. The owner, and original brewer, Marc Rubenstein, felt that Syracuse needed a local brewery and opened Middle Ages at this historic spot. His beers are mostly influenced by British styles and much of the malt used is imported directly from England. The tasting room is located right next to the brewery so you can peer through the windows at the fermentation tanks. The brewery offers tours on Sundays by request. The tasting room also sells assorted merchandise such as clothing, growlers, six packs, and 22 ounce bottles. 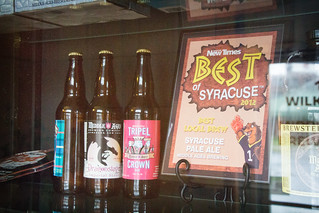 Middle Ages currently runs on a 30 barrel system and distributes its beer throughout a few of the states in the northeast United States. Eighty percent of their beer though is sold locally in Onondaga County. The brewery also makes two house beers for the ever popular Dinosaur Bar-B-Que. The most popular beers Middle Ages currently produces are Impaled Ale and Swallow Wit. The one-off, once a year beers they make are also extremely popular during the limited time they are available.

I enjoyed most of the beer that they had to offer. In my opinion though, the samples were served much too cold and needed to be warmed up a bit to get the proper aroma and flavors from the beer. I was disappointed that the brewery was so crowded and I could not get much more information on the brewery. However, their web page is well designed and offers plenty of knowledgeable material both on the brewery and individual beers. My favorites of the day were the Duke of Winship (Scotch Porter), and the India Black Ale which offered a decent blend of heavy hop aroma and roasted malt character. 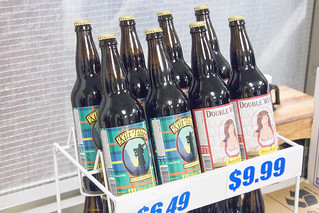 The brewery has a very friendly cat which lives there full time. Somehow, she manages to sleep in her bed on the bar while people are talking noisily all around her! Apparently, the brewery cat is very good at taking care of the mice which sometimes make their way into the old building! I think Middle Ages Brewing Company is a great brewery to check out while in Syracuse. While it wasn’t an optimal time to visit, especially with the Syracuse Basketball fans running rabid, it still offered a decent experience and a wide range of British style beers to try. I looking forward to return visits to take a tour and gather more information to share with the blog! 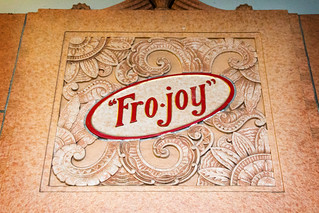 As stated previously, the brewery is in the former home of the Sealtest Ice Cream Factory. Sealtest Ice Cream dominated the ice cream industry in the 1950’s and 1960’s. You can still see hints of this history such as the Fro-Joy logo carved in the wall of the lobby. It is nice to see historical buildings such as this one getting re-purposed as opposed to being demolished! 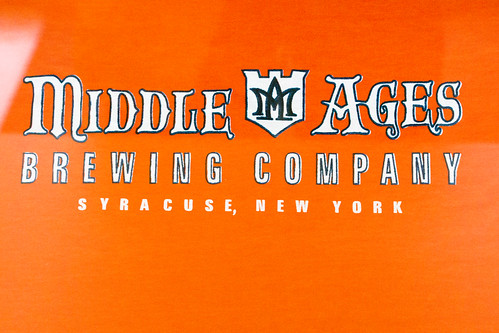