There is a small region around Lake Erie in western New York, Pennsylvania, and Ohio that contains thousands of acres of grapes. While many are used to produce grape juice, dozens of wineries are also creating wine from this fertile region. Tim and I had a chance to stop into Mazza Chautauqua Vineyards which recently moved to a new location to coincide with the introduction of Five & 20 Spirits. 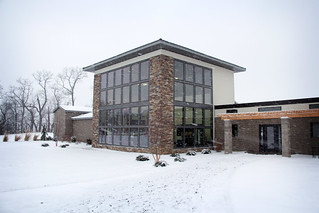 Mazza Chautauqua Cellars has opened up a beautiful new tasting room on Route 20 in Westfield, NY. This location is well designed and allows you to see the inner workings of the Five & 20 Spirits Distillery as well. It opened in July of 2013 and really looks impressive; with long counters designed to accommodate large groups of people. The brightly lit interior is filled with windows that give a great view of the vineyards. In the tasting room we spoke with Steve, the café and tasting room manager. He is also one of the distillers and was able to give us more information on that end of the business as well. First though, let’s take a look at the wines and spirits that we tried during our visit. 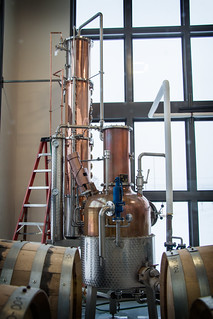 It should be noted that we did not try wines that were produced with grapes from outside the Lake Erie region. For example, their Shiraz is from Australia and the Merlot is from Long Island in New York. While I am sure they are wonderful wines, our intent was to see what the winemaker is able to produce from the local terroir.

My favorite of the wine line-up was the Bare Bones White; a nicely made table wine that was bursting with flavor without being overly sweet. It was crisp and clean and sold for a great price. According to Steve, the most popular wines are the Lighthouse Point Rosé, a sweet grapey wine, and the Bare Bones White. For three dollars, you receive six tokens which you can trade in for sample pours of the wines or spirits. This is an interesting approach since some of the offerings require multiple tokens, such as the ice wine.

The Mazza family actually is involved with three wineries; Mazza Chautauqua Cellars, Mazza Vineyards, and the South Shore Wine Company. They started producing wine in 1972 and this particular branch of Mazza opened in 2005. When the winery first opened in its original location, it housed a small distillery that created fruit brandies, grappa, and spirits used in the creation of their fortified wine. Wanting to better establish the distillery as a local source for quality spirits, the entire operation moved to Westfield, NY in 2013. The larger facility can better support the distillery which runs off a 105-gallon copper pot still from Germany. This is the Mazza family’s first establishment in New York as their two other wineries are located in Pennsylvania. They have been producing fruit brandies for awhile but whiskey production is a fairly new endeavor for them. One of the things I like about the distillery is that they try to use local grain whenever possible. In fact, they hope to eventually grow everything they need directly on site!

Because the Distillery is still so young, only two whiskeys were ready to try; the un-aged corn whiskey, and the aged rye whiskey. While both were pretty good, I want to return in the future when they have had a chance to mature. I think the rye whiskey would be nicer with a bit more aging. Plus, they are also looking to craft bourbon which could be quite enjoyable! They have four distillers on staff so there are sure to be some interesting new ideas in the works. 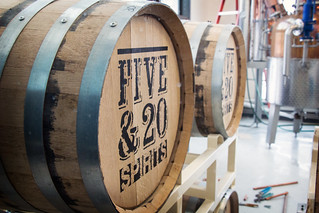 Another planned feature is the addition of a brewery. This will certainly make them a unique attraction in the region as no one else has a facility that creates wine, beer, and distilled spirits simultaneously. I am looking forward to trying the beer once they start production.

If you wish to purchase any of their wines and spirits, they are all available in the tasting room. You can also find them at liquor stores throughout the region and even as far away as Rochester, NY. Mazza Chautauqua also produces wine for Bulls Eye, a freestanding wine brand from the Rochester / Finger Lakes region. These wines are not sold at any of the wineries, but are designed to target the most popular wine styles in New York State. The distillery also does contract work for Dutch’s Spirits which is currently working on building its own distillery.

Mazza Chautauqua Cellars and Five & 20 Spirits is a great place to visit if you want to try a diverse selection of wines and some interesting spirits. I hope to return sometime in the future once their brewery opens and they have more spirits available.

Five & 20 Spirits is so named because it resides on land between Routes 5 and 20. These routes started as foot trails used by the Native Americans and soon became the primary turnpike through upstate New York. This 135 mile corridor is filled with wineries, historic sites, fine dining, and gorgeous landscapes. If you ever want to get off the beaten path, slow down and take a leisurely drive down these highways of yesteryear! 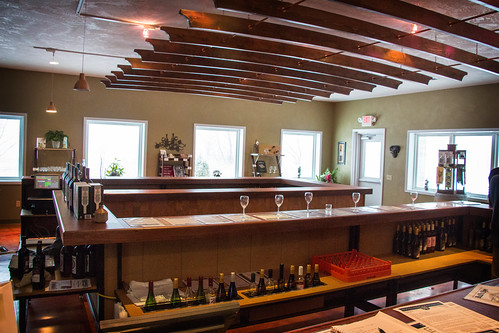