Driving back to the hotel for the evening, we saw signs for the newly opened Arundel Cellars and Brewing Company. Curious, we turned around and visited the winery which was still in its soft opening phase.

Like many of the wineries around the area, Arundel is situated in an old historic building. Built back in the 1800’s as a cider mill, it now houses the tasting room and wine making operation. The winery was not set to officially open until later in 2014, and the brewery portion was still in the planning stage. Undeterred, we decided to hang around and look at what they did have to offer. Anya was very helpful in filling us in on the story of the winery. We tried a selection of their wines, stopping short of the sweetest wines available. 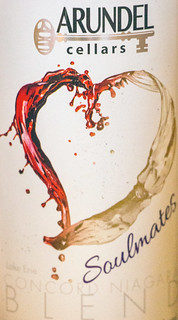 According to Anya, the winery is named after a small castle in England called Arundel. Back when this land was an apple orchard, Frank Schultz had painted the castle on the side of the cider mill.The four families who run the winery kept the name as they wanted to keep Frank’s memory alive.

History is also reflected in the names of some of the wines. For example, the Handsome Cab is so named because the inventor of the Hansom cab came from the region around Arundel castle. Another interesting story involves their Falcon Red. When construction and renovation of the winery began, workers found a nest of birds within the old cider mill. A local conservatory took the birds in, and moved them to a protected birdhouse. From there, a rehab center was contacted and the falcons were monitored, fed, and soon released back into the wild. All three birds survived. A percentage of the money from sales of Falcon Red goes to the Tamarack Wildlife Rehabilitation Center. It is stories like this one that intrigue me and really help put a face on the wine. I’m glad to see they were able to save the birds.

Arundel Cellar’s logo is a simple skeleton key; designed so as not to pinpoint any particular castle or barn, but rather the era when the cider mill was constructed. This type of historical imagery can also be found on some of their wine bottles such as the Vidal. The winery plans to continue making labels with interesting historical iconography.

The four families who own the winery have ambitious plans. Before the end of 2014 they hope to have the brewery and a small kitchen up and running. Right now, three varieties of grapes are grown on the estate with plans for more on the way. I have also read that they will start making cider once the apples are ready in the fall.

While it is still a very new winery, I have high hopes for Arundel Cellars. I enjoyed the wine we tried and was impressed by the Cabernet Sauvignon as I consider that a tough grape to grow well in this climate. The wines are all quite lovely and drinking well now. I imagine that as the wine making process and vineyards mature, the finished product will get even better. I look forward to returning soon to see the completed tasting room and visit the brewery.

What makes the Lake Erie region such a popular area to grow grapes in? The weather of course! During the spring, cold breezes prevent the vines from budding too early, when they still have a risk of being killed by frost. Summertime brings more air circulation that prevents diseases from spreading. Finally, in the fall, the warmth from summer is retained, postponing the first frost and allowing the grapes to continue to mature. 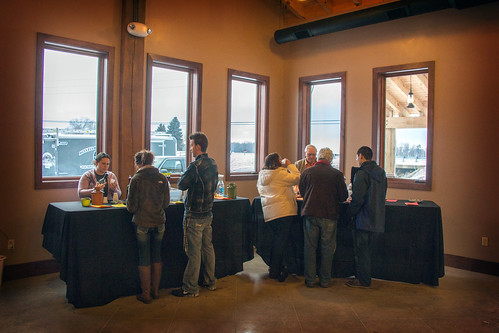