When one thinks of Voodoo, images of New Orleans, witchcraft, and voodoo dolls might come to mind. However, at Voodoo Brewing Company in Meadville, Pennsylvania, a different type of magic is occurring that involves hops, malt, water, and yeast. A visit was definitely in order during our winter beer and wine mega trip! 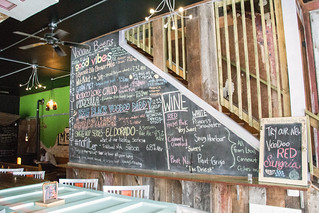 Voodoo Brewing Company, established in 2012, is located in an old building in a nondescript area of Meadville. We got there right before it opened and were surprised to see we weren’t the only ones waiting to get in. We quickly discovered that the brewery also serves up excellent food and that is what people get there so early for. From the outside, the brewery doesn’t seem like much, but the interior is an entirely different story. Upon entering, on the left is a 54 foot long bar made with a thick concrete top. Old doors hang from the ceiling. These doors used to reside in homes located in Lily Dale, a community of spiritualists in Upstate, New York. So maybe there is a bit of real magic in the air.The brewery is oozing with atmosphere; visitors are surrounded by so many things to look at while hanging out there. Voodoo Brewing is very laid back – relax and take it all in.

At the bar, we spoke with Jacob who was able to tell us more about the brewery. Their brewer, Matt, has been brewing for well over ten years and specializes in Belgian beer styles. We were eager to try out the range of beers on tap and got a flight of all they had to offer. 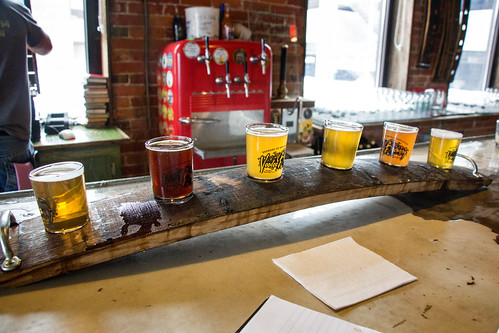 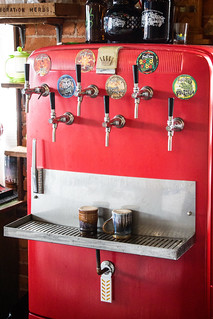 Upon sampling, the first thing we noticed is that most of the beers available are bigger, higher alcohol beers. With the exception of three choices, all had ABVs higher than 7%. These higher ABV beers hid the heat of the alcohol very well and were bursting with flavor and big body. My favorite was the Big Black Voodoo Daddy as I am a sucker for bold complex Imperial Stouts. It is hard to pick just one favorite though because most of the beer really wowed me, especially the Belgians like the Gran Met, which is also their most popular beer. 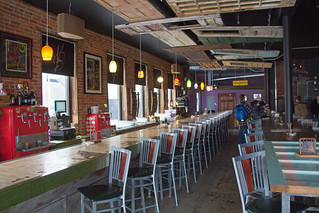 Besides offering a rotating selection of food sourced from local, natural, and organic ingredients, Voodoo Brewing sells t-shirts, hats, and growlers. Their beer is also available in bottles but they soon plan to start canning as well. Another nice option they have to drink is wine made locally by Conneaut wineries. Even the tea, Voodoo white and red, is supplied by a local tea maker. 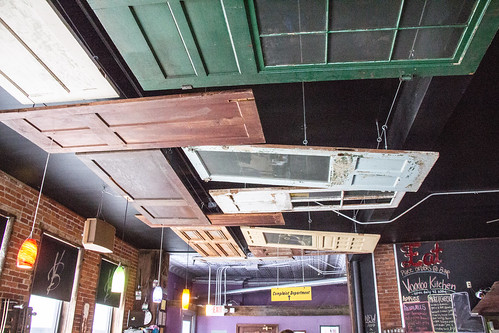 To say that Voodoo is a part of the community would be an understatement. When limited release barrel beers come out, the brewery hosts small celebrations that actually close down the street. People come from near and far to purchase and taste these highly coveted beers. I recall a chance I had a few years ago to try one of their barrel aged beers and was very impressed. Other seasonal beers are also rotated through the brewery at least every month and a half. There is always something new and exciting to try at Voodoo. 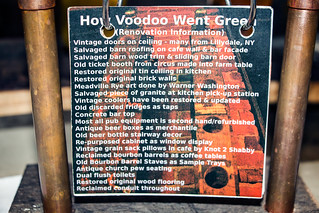 Voodoo Brewery prides itself on going green. There are so many things they have done to be ecologically mindful that they even have informational paperwork with their actions on it. From salvaged barn wood, to the doors on the ceiling, everything is recycled. In fact, when you get your bill, it is placed inside an old book that would have been discarded by the local library! It is a nice touch that makes you feel that Voodoo is doing as much as possible to give back to the environment. I recommend clicking on the picture to see the entire list of things that Voodoo has done to go green during its renovation. 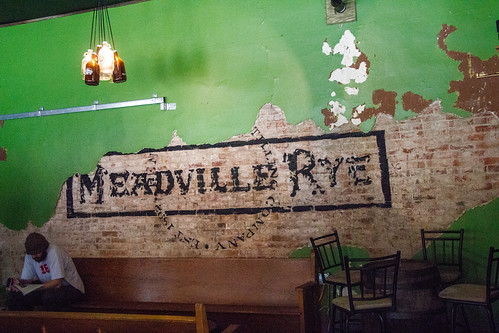 Currently, Voodoo’s beer is distributed throughout Pennsylvania and New York City. I can only hope that with the potential to start canning, we will see distribution in upstate New York and beyond. Until then, Voodoo Brewing Company will always be a destination for me if I am driving through the area. I look forward to returning and seeing what the future brings as Voodoo continues to work its own blend of magic!

Lily Dale, New York is a spiritualist community located in New York. Its founders Kate and Margaret Fox moved here when it was purchased in 1927. Each year, thousands of people visit for classes, lectures, church services, and meetings with mediums. Perhaps some of the mysticism of Lily Dale came to Voodoo with the doors on the ceiling? To learn more about the spiritualist movement, check out this informative article over at the blog Exploring the Burned Over District. 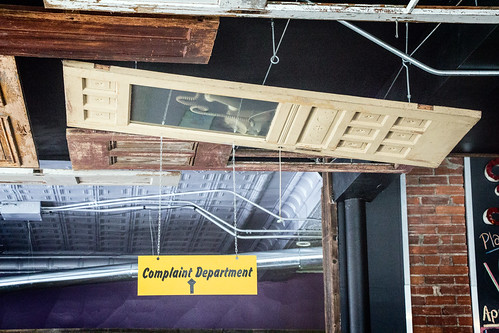