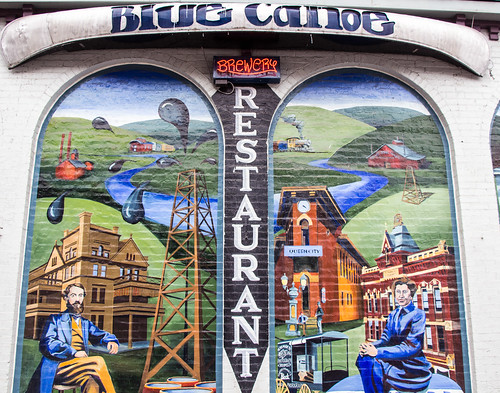 With our long weekend of visiting new and interesting locations to write about for Liquid Alchemy coming to a close, we decided to make one more stop at a location that certainly seems off the beaten path. The Blue Canoe Brewery in Titusville, Pennsylvania may not have been on our direct route home, but it was certainly worth visiting for their unique approach to many different styles of beer.

The town of Titusville is known as the birthplace of the modern oil industry. Before stepping foot into the brewery and restaurant, I recommend checking out the gorgeous mural on the side of the building that showcases key moments in the history of the town.

Once you step into The Blue Canoe, the scenery shifts to something a bit more rustic. The countertop of the bar has a river painted on it, the beer taps are shaped like canoe oars, and a large canoe hanging above it all takes center stage with a list of the currently available beers written within it. While enjoying our flight, which also comes out on a board shaped like a paddle, we spoke with Jen about the brewery. 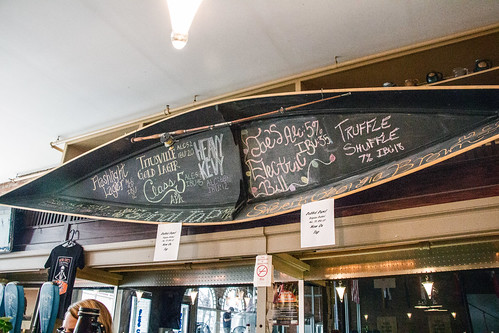 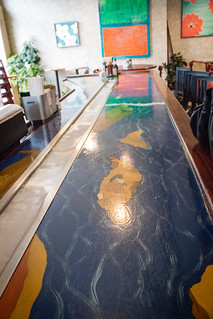 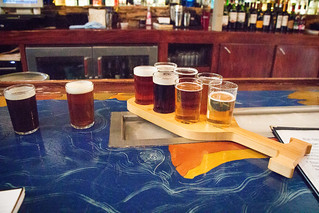 As you can probably tell from our sample flight, the range of beers is pretty diverse. From light lagers all the way to sweet dessert like beers, they have it all. In 2008, Bill Zimmer and Jeremy Potocki, friends since childhood, opened the restaurant and brewery. Besides offering a wide selection of beers, Blue Canoe has a wonderfully diverse menu with constantly rotating specials and decent prices. We were there for lunch and I found the sandwiches to be satisfying and delicious. You can check out their Facebook page to see some of the many interesting specials that they serve. 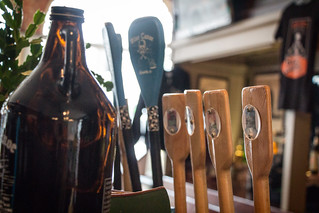 Justin Dudek, the current Brewmaster, apprenticed under Matt Allyn who went on to form Voodoo Brewing in 2010. Before brewing professionally, Justin was a homebrewer for many years. Justin is known in the area for creating some pretty out there concoctions. Some of the ones we were able to try, like the Sweet Georgia Brown and Truffle Shuffle, are certainly unique and interesting to sample. Examples of his other adventurous recipes include a Vanilla Chai Stout on Nitro, a Chocolate Cheesecake Stout, and a Snickers Stout made with fifty pounds of Snickers bars! These beers definitely cater to those with a sweet tooth and would make for a great dessert. By far the most intriguing beer I heard about was Justin’s Maple Bacon Pancake Porter that is created with ten pounds of bacon, pancake batter, and maple syrup! This is certainly something I would be curious to try, just maybe not a full pint of it. For Justin though, his favorite beer he has produced so far is Spinal Tap, the double IPA. He also is a Belgian beer fan and enjoys producing that style as well. He has well over a hundred recipes he works with so there is a constant rotation of new and interesting beers to try. 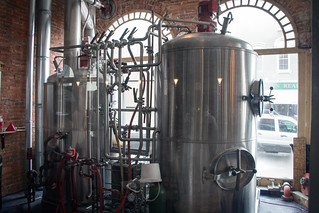 The Blue Canoe Brewery runs on a seven barrel system. This gives Justin plenty of room to keep a diverse lineup and continue to experiment with new and interesting beers. I heard that he is also an aficionado of sour beers so it would be fun to see him make some more of those for folks to try. He is hoping to do some canning soon but for now the beer is available mostly at the restaurant with a very small distribution of kegs.

The restaurant and brewery also sells the usual stickers, hoodies, and growlers. One fun addition they do have is a mug club with over 500 participants. Each member receives a ceramic mug solely for them to use when they come to The Blue Canoe. The bar also hosts multiple TVs for those that need to get their sports fix while enjoying the beer and food.

I really enjoyed my visit to The Blue Canoe. The brewery is certainly off the beaten path of major thruways and expressways,  however I would make a return visit just to try Justin’s adventurous beers. In the meantime, I will just have to imagine what the Maple Bacon Porter tastes like! If you find yourself travelling through Titusville, PA, do yourself a favor and stop in to try some unique interpretations of many different beer styles. 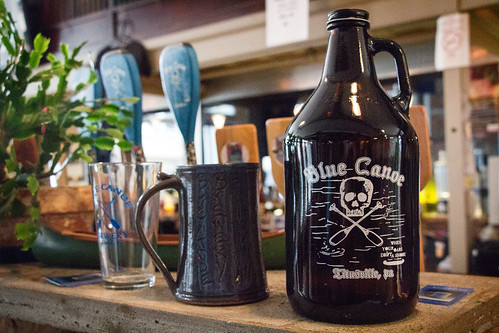 As mentioned earlier, Titusville is where the modern oil industry really started. In the late 1850’s petroleum was discovered, and the first commercially successful oil well was drilled. Soon the oil business exploded and eight refineries were built. It was said that at one time, Titusville had more millionaires per 1,000 people than anywhere else in the world. Today you can visit the Drake Well Museum located at the site where Colonel Edwin Drake first successfully drilled for oil. 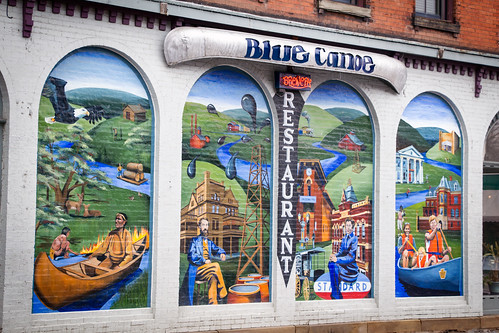