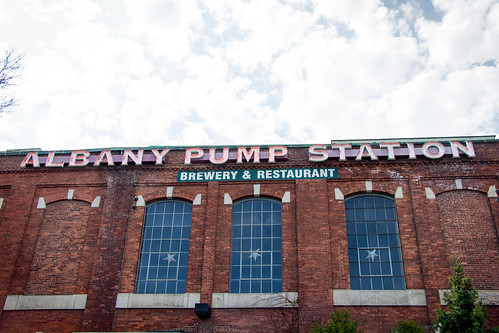 Albany is not only the capitol of New York, but was once the largest brewing hub in the country. After prohibition took its toll on breweries, only a few remained and Albany was no longer as important to the beer industry. Today, C.H. Evans Brewing Company at the Albany Pump Station is the only active brewery in the city, but they are diligently working to keep up a fine brewing tradition. Step into “The Pump Station” to learn a bit about New York’s beer history, have a meal, and of course, enjoy some interesting beers. 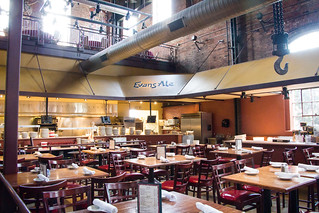 The brewery, housed in what was an actual pump station built back in 1874, is a huge structure that has two floors to explore. Photos scattered along the walls explore the history of the original C.H. Evans Brewing Company which was established in the Hudson Valley in 1786 and continued to produce beer until prohibition in 1920. Today’s iteration of the Brewery was established in 1999. After exploring the Pump Station, we headed to the bar where Tim took our order and answered questions about the brewery and its history. 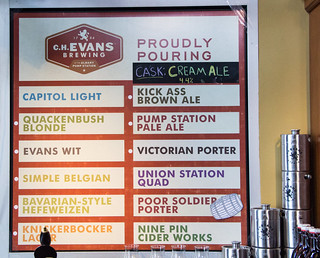 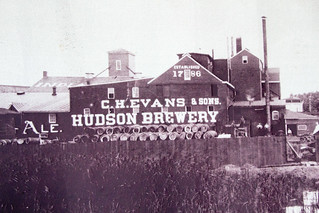 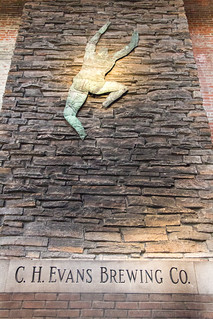 As you can see, the brewery offers quite a variety of beers on tap. The beers were well made, and I feel are a great lineup to introduce the macro-brew crowd to craft beer. However, I didn’t find a lot that truly excited my inner beer geek. My favorite was the Quad which was very unique and tasty. I was hoping for more from the Rum Porter but personally, I think it was aged a bit too long in the rum barrels.

According to Tim, the most popular beer is currently the Kick-Ass Brown. I can see why people like it as the beer is a good introduction to darker, maltier styles of beer. Kick-Ass Brown has also won many awards throughout the years at both the World Beer Cup and the Great American Beer Festival.

The brewery has a ten barrel system, allowing them to keep a diverse range of products available and for sale. They distribute the beer throughout the Hudson Valley region. While at the Pump Station, a sampling of eight beers can be had for $8.00. The pours are generous and it is a good way to try a wide variety of what they offer. Be sure to try the cask ale if they have one available as a new beer is tapped every Friday. 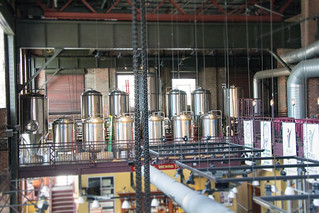 The building is the star of the show and is definitely one of the main attractions when visiting the brewery. The Pump Station actually consists of two adjoining buildings that were completed in 1895. It once drew water from the Hudson River and pumped it up to a reservoir that later was turned into a stadium. In 1932 a newer pump house was built and the Pump Station was made redundant. Many decades later the Evans family decided to acquire the building to use for their new brewery, bringing the tradition of brewing back to the Evans’ name. Note the two large cranes above you upon entering the building; they were installed back in the early 1900’s and are still operational today. In fact, the cranes were used to place the fermentation and serving tanks above the main bar! Walk into the adjoining dining room and a gorgeous stone fireplace takes center stage on one wall. I imagine this is a great space to have a party or just hang out relaxing with friends on a cold winter evening. 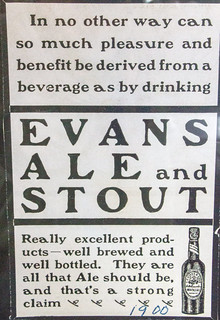 Throughout the building a collection of memorabilia from the original C.H. Evans Brewing Company can be seen. The Evans family brewed for three generations before prohibition and their award winning ales were known throughout the northeast US. Some of their beer was even exported to England and France! The Evans Brewing Company was one of the first US breweries to bottle its own beer back in 1889 and also produced much of its own malt. Luckily, they managed to preserve much of this history and put it on display throughout the Pump Station for people to read about.

The Pump Station is a great place to visit if you are ever in Albany. While much of the beer is pretty standard, there are a few gems that will appeal to those looking for something a bit more expressive. The building itself is certainly an excellent reason to visit, especially if you enjoy history. Be sure to stop in some evening, grab a bite to eat and a pint of beer, while contemplating the history of brewing in the state of New York!

If you crave more history, just a short drive away from the Pump Station is the New York State Museum. This expansive museum has exhibits devoted to the Adirondack wilderness, the New York metropolis, birds, and much more. Especially gripping is the exhibit on the tragedy that occurred at the World Trade Center. The story is tastefully presented with many artifacts that help show what happened on that day in history. Very few people leave that exhibit with dry eyes as it is extremely powerful. Be sure to check it out if you are exploring Albany, NY! 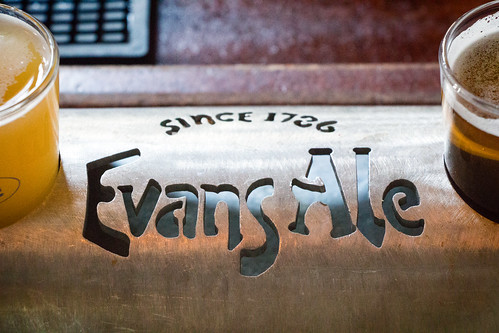