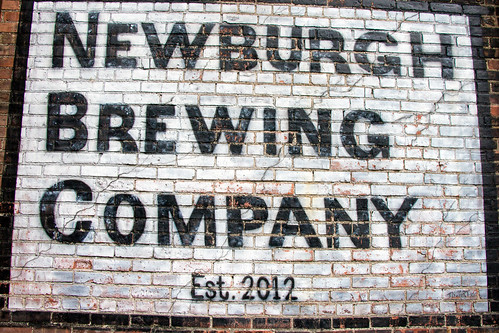 Travel around the Hudson Valley region of New York, and you’ll experience an area rich in history and natural beauty. Newburgh, NY, situated on the Hudson river midway between New York City and Albany, played an important role in American history. During the revolutionary war, George Washington’s army was headquartered here and critical decisions about the future of our country were made. I’m sure many of these contributions were crafted over a pint of ale, as beer has been brewed in the region since the 1700’s. Newburgh Brewing Company is proud to keep that tradition alive today and makes for an excellent beer destination. 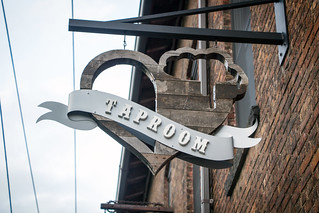 The brewery is located within a massive four story building that started life as a steam engine company over 160 years ago. It is situated on a hill  from which you are afforded great views of the Hudson River. In 1910, the ediface became the headquarters for the Newburgh Paper Box factory which was in operation until 1980. I love seeing historical buildings such as this one re-purposed yet still offering glimpses of the original history. We walked up to the top floor and were amazed by how open and spacious the layout was. It brought to mind images of German beer halls with lots of very long, wide tables that allow for plenty of people to hang out without feeling over-crowded. At the bar we met Paul Halayko, the President and Chief Operating Officer of the brewery. While chatting with him about the brewery we had the chance to try a variety of excellent beer. 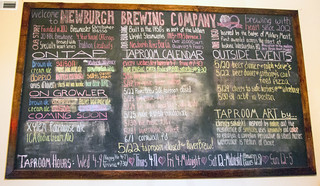 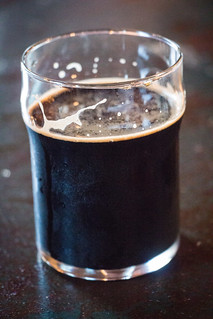 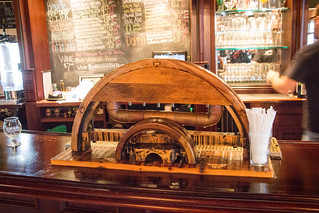 The selection of beer that Newburgh offers is diverse and well crafted. Brewmaster Chris Basso worked at Brooklyn Brewery for six years before opening up Newburgh Brewing Company. His years of experience pay off in the quality of the beer and there is a lot to be excited about at the brewery. Chris specializes in English style ales and lower alcohol session beers such as the Bitter English which was quite good. 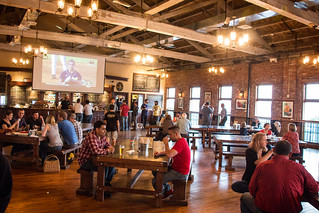 Newburgh Brewing was established by Chris and Paul back in 2012 and it has been a tremendous success ever since. Their beer is distributed throughout the southeastern portion of New York as well as parts of New Jersey. It should be noted that they use pressurized filling machines so only pre-filled growlers can be sold. However, the best way to experience the beer is at the taproom itself. With plenty of huge tables, as well as foosball, cornhole, and even a wide variety of board games, you can easily spend an afternoon there. During our visit, a small band was playing live music, something that happens quite often at the brewery. The crowds were pleasant, and everyone seemed to be having a good time. Above the bar is a huge screen tuned to sporting events. I love the fact that Newburgh Brewing Company is designed as a place to hang out, play games, and enjoy a good pint or two with friends. 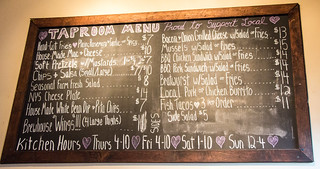 If you get hungry, Newburgh has you covered there as well. A small menu consisting primarily of sandwiches, cheese plates, and a few other goodies will entice the hungry visitor. It’s also nice to know that they use farm fresh, locally sourced ingredients in most of their entrees. Speaking of local ingredients, wine from nearby New York State wineries can also be purchased by the glass. The tasting room also sells shirts, bottle openers, and other assorted brewery related paraphernalia.

At Newburgh Brewing Company, the Cream Ale is currently their most popular offering. Not many places craft cream ales, and Newburgh makes a very nice one. My personal favorite during our visit was the Newburgh Conspiracy, a rich and seductive Russian Imperial Stout. Other beers of theirs that I heard are worth trying are the Peat-Smoked Stout and Sally’s Oyster Stout. The Oyster Stout is made from a second running of the Newburgh Conspiracy and includes oysters from nearby Sally’s Fish Market! 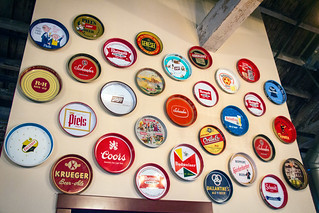 One of the interesting things to search out if you visit the brewery is the collection of old serving trays displayed on one wall. It is fun to look back at the history of beer, and these trays offer insight into breweries of yesteryear, some of which still exist today. Also, check out the Newburgh Brewery logo, a heart shaped icon that includes a portion as a pint of beer. It was inspired by the Badge of Military Merit, first awarded at George Washington’s headquarters right down the road from the brewery. This was the precursor to the modern day Purple Heart Award. It’s great seeing Newburgh using local history to make a fresh and fun symbol representing the brewery of today.

I enjoyed my experience at Newburgh Brewing Company and think you will too. Great beer, delicious food, and shelves of board games really make it a fun place to spend the afternoon. With panoramic views of the Hudson River, the brewery is worth a visit any time of the year. I look forward to getting back down there again soon!

Newburgh, NY played an important role in the shaping of the United States and our government. During George Washington’s stay there, many critical decisions were made that affected the country, such as rejecting the idea of being crowned as King. Today, you can visit Washington’s headquarters as it is a State Historic Site. I hope to visit this museum when I have more time to fully explore Newburgh, NY! 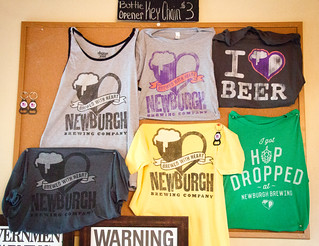