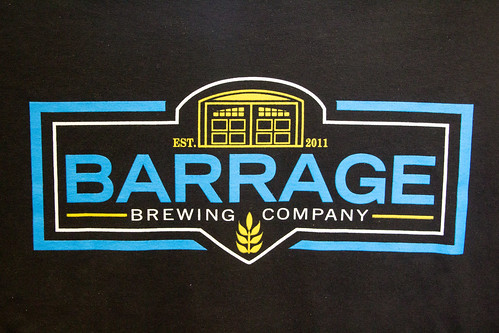 With so many new breweries popping up left and right these days, it is important to differentiate yourself from the competition. Barrage Brewing Company, located in Farmingdale, NY is working to create a name for itself by crafting beers that range from the traditional to the unexpected.

Walking into Barrage Brewing we realized that we were in the middle of a working brewery. Barrage opened to the public for tastings in January of 2014, but Steve Pominski, the owner and brewer, had been brewing in this location for two years previously. We arrived about a month short of the grand opening of their new tasting room but there was still a steady flow of customers coming and going during our visit. Steve had a nice assortment of beer on tap for us to try while learning about the brewery. 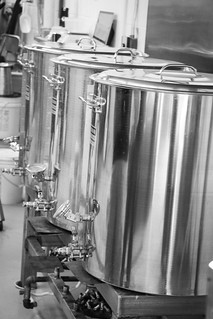 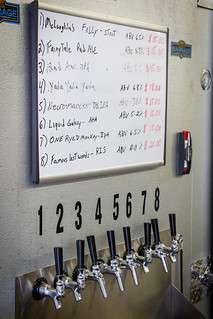 Steve started homebrewing over 15 years ago out of his garage. Then, in 2012 he decided to move into the current facility located in a nondescript business park. He was hoping to open the brewery up to the public sooner, however Hurricane Sandy stalled his plans and resulted in new projects to deal with such as the replacement of the sewage lines. A Kickstarter campaign helped out considerably and $18,000 was raised to expedite the work that needed to be done. When we visited in May, the brewery was fully functional with a wall of eight taps, but most of the space was dedicated to the brewing equipment. In July, Steve finished building the tasting room, giving people a more relaxed environment to try the beer in and not get in the way of brewing operations! 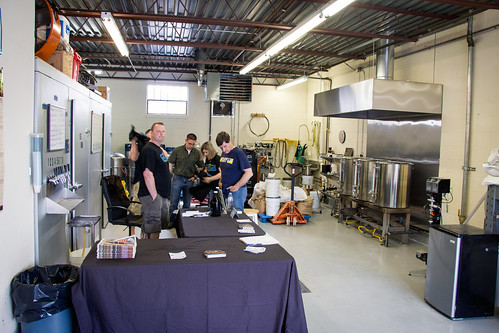 Steve brews many different styles of beer at Barrage Brewing. His favorites are Old English Ales, Porters, Stouts, and big juicy IPAs. He currently is interested in sours and hopes to experiment with them soon. Working with only a one barrel system makes it tough to be able make as much available as he wants but I was still impressed by the variety that was on hand. Many places with larger systems do not have this kind of diversity. Currently Steve has about 30 recipes he works with but I’m sure the number has gone up since our visit in May. His most popular beer so far has been Citralization which is part of a series of single hop variety beer that he produces; this one made with all Citra hops. Citralization was not available during our visit but we were able to try Liquid Galaxy, another in the same single hop series, this one brewed with 100% Galaxy hops. It was quite nice but my favorites of the current draft pours were the stouts and the brown ale. 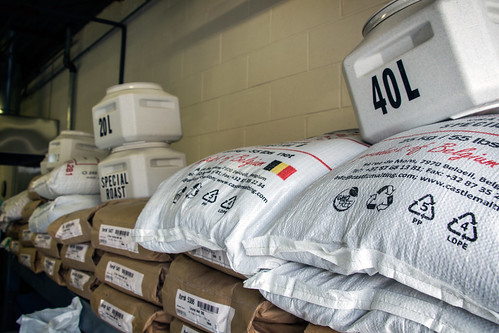 Steve packs a lot of interesting flavors into his beer and I especially enjoyed some of his more interesting creations like Yada Yada Yada and Famous Last Words. Yada Yada Yada is a brown ale brewed with over five pounds Snickers candy bars that Steve designed for a special Seinfeld themed dinner. It is unique and makes a great replacement or accompaniment for dessert. Famous Last Words is a Russian Imperial Stout made more unique by the inclusion of coffee, molasses, and honey. The honey is from a farm in upstate New York and the complex flavors in this stout make it worth returning to. 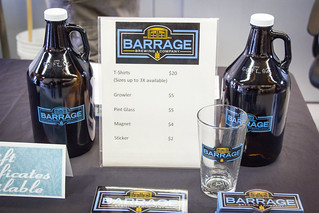 For now, the tastings are free but this may change down the road out of necessity. The brewery also sells an assortment of t-shirts, growlers, pint glasses, magnets, and stickers. Check out the brewery logo on all the merchandise as the garage on the image represents the garage that Steve spent years brewing out of. In fact the name Barrage Brewing is a combination of the words bar and garage, as he and his neighbor built a bar in the garage to hang out at while beer was being made. The beer is also available at some local restaurants and bars though supply is limited as Steve’s main concern is keeping the lines full at the brewery for people purchasing growlers.

Barrage Brewing Company is certainly a brewery to be on the lookout for. I enjoyed all the beer that was available and I am looking forward to seeing what the future will bring. With the opening of a full sized tasting room, Barrage is well on its way to becoming a destination on Long Island for many beer lovers!

When last we visited Barrage Brewing Company, the tasting room had yet to open and samples were provided on the main brewery floor. I was eager to see the completed space for customers and also wanted to taste some of their new beer. Steve Pominski’s wife Diana is in charge of the tasting room and she led us through a flight of their current offerings. 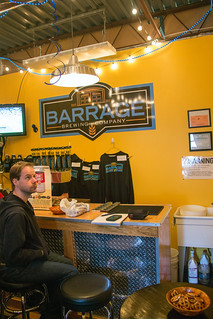 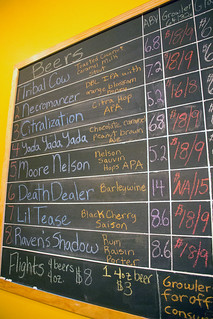 The new tasting room is quite cozy, with a few small tables and seating at the bar, as well as a TV to watch. Bowls of pretzels are available to munch on while enjoying your beer. I was fond of the yellow-orange color scheme of the walls as it makes everything pop. It was quite busy in there but luckily we were able to grab two seats. One thing that surprised me was the price of a flight. Previously, flights were complimentary but now cost $8.00 for four samples. You also have the option of buying pints of beer as well.

The beer was all pretty pleasant though they did seem to lean towards the sweeter end of the spectrum. Steve has been experimenting with wood aging and soon hopes to have some barrels in to work with. I’m a sucker for barrel aged beer and am eager to see what he comes up with next. Currently, Barrage’s beer is distributed only on Long Island and a little bit into Queens. 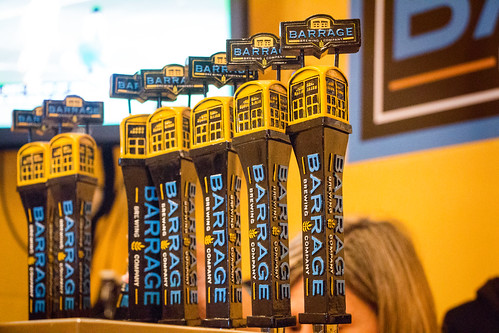 I was glad we had the chance to stop back into Barrage. The new tasting room is a great addition and makes for a more welcoming experience at the brewery. Steve continues to put out interesting beers and I was glad to see that Yada Yada Yada is produced on a regular basis. I look forward to seeing how Barrage continues to evolve over the next few years.

While at the brewery you may hear the sounds of planes and this shouldn’t surprise you. The nearby Republic Airport  is used by private and corporate flights. The airport hosts a museum, the American Airpower Museum, devoted to preserving the history of Veterans and American military aircraft from World War II. It looks like a unique place to visit and I plan to check it out when I next travel to Long Island. 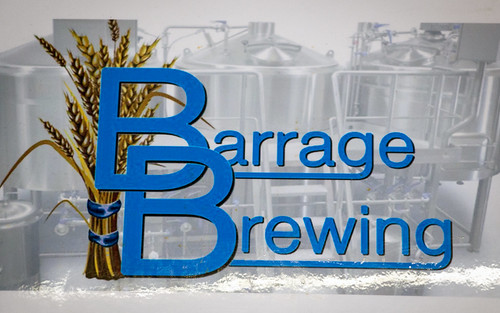