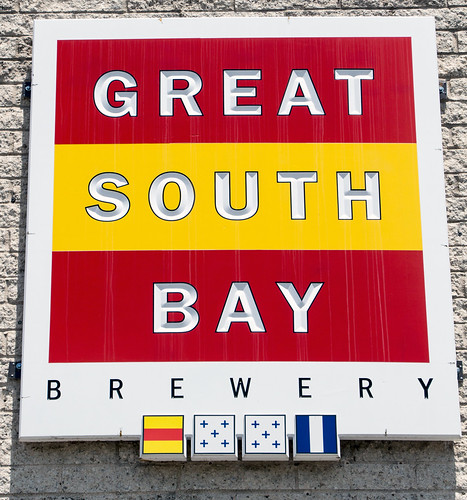 Few breweries find themselves needing to upgrade their facilities within the first few years of opening. Great South Bay Brewery in Bay Shore, NY is one such brewery that has seen rapid growth, requiring a major expansion to their operation. Previously, I had an opportunity to visit the original location. Stepping foot into the new tasting room I was pleasantly surprised by what I saw. Visitors are presented with an even more diverse selection of beer while in a tasting room worth spending time in.

Walking into Great South Bay Brewery, you are at once overcome by the size of the operation. At over 39,000 square feet, the brewery and tasting room take up a large building located in an industrial park. Their previous facility was much smaller and the brewery is happy for the extra leg room that this new building provides. We spoke with Greg Maisch, the Head Brewer, while trying a sampling of all they had on tap. 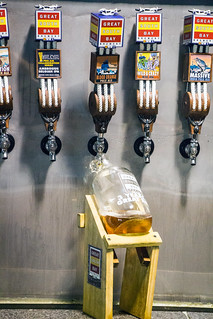 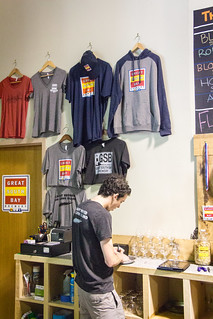 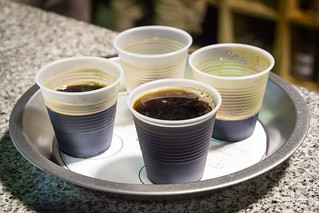 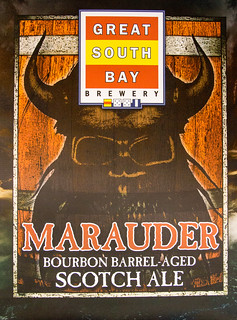 Great South Bay Brewery opened its doors back in early 2010 at a location a few miles away from the current facility. At the time, they had to have a lot of their beer contract brewed because they didn’t have enough room or equipment to do it all themselves. The new brewery had its grand opening in the summer of 2012 giving them the space needed to stop contract brewing. Since then, they have continued to expand greatly and in the summer of 2013 they upgraded to a thirty barrel system. This is tremendous growth and bodes well for the future of the brewery.

Greg, the head brewer, got his start like many others in the home brewing community. Along the way he invented some equipment to help in the brewing process. He was hired on at Blue Point Brewing Company, located a bit further east on Long Island. After working there for awhile, Rick Sobotka, the founder of Great South Bay, asked him to come be the head brewer. The rest, as they say is history. Interestingly enough, Rick is also an anesthesiologist and started brewing beer as a hobby! Greg enjoys the challenges involved in making bigger beers. Perhaps because of this reason, they tend to make a lot of dark beers, which Greg loves but is looking to maybe try for a bit more diversity in the future. He is always tweaking the recipes to try to extract the most interesting flavor profile he can. Greg is very excited about the beer he is producing and I think the enthusiasm comes through on the finished product. 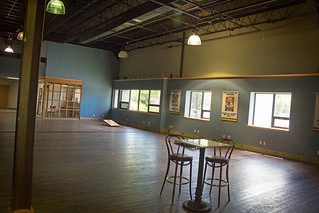 The tasting room itself has a lot to offer.  There is plenty of room with scattered tables and chairs, as well as a big screen TV to watch. They also offer assorted games such as corn hole. The marble bar is beautiful and you can pick the brains of the staff there like we did. Thursday evenings are Acoustic Thursdays and the brewery has different local bands that come and perform in the tasting room. Great South Bay has a food truck outside the tasting room on occasion but is hoping to eventually have its own kitchen. Tasting flights will set you back just five dollars, plus an extra dollar for the higher ABV beers. One thing I thought was interesting is that the beer is currently served in plastic cups. Apparently they were still waiting on a certain New York license to be able to serve out of glassware. The tasting room also sells hats, t-shirts, and even mason jars if you like to drink out of that sort of thing!

Great South Bay has a great monthly project they do with the Long Island Homebrew club. Every month the club has a contest and the winner gets to brew their beer on the breweries equipment, and then it is sold as a collaboration beer. The month we were there they had Ambrosius, a Belgian IPA for sampling, which was a homebrew club winner. I think this is a great idea and a really nice incentive for local home brewers to put out the best beer they can make. Who wouldn’t want to see their beer brewed on a larger scale? 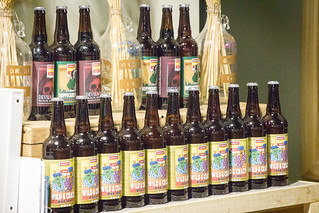 Some of the ingredients used by Great South Bay are sourced locally when possible. For example, their Snaggletooth stout includes locally grown Red Delicious apples. The brewery also gets wet hops from the Condzella Hop Farm, also located on Long Island. The brewery has done some interesting experiments to produce different types of beer as well. Devil’s Deed, a black sour ale, started life as the second runnings of Dirty Deeds, their Russian Imperial Stout. Then, they inoculated the boil kettle with lactobacillus bacteria and kept a layer of CO2 on top while it fermented. The results are interesting and it makes for a really nice sour beer.

Great South Bay Brewery had a steady flow of people coming and going during our visit. I especially enjoyed Lethal Cupcake, an Imperial Chocolate Porter, and Dirty Deeds, the Russian Imperial Stout. Greg is quit adept at making these darker beers; they are very complex and multi-layered. Six-packs are available and growler fills of all but the small releases can be purchased at the brewery. For the small batch releases, they are only available to drink while you are there. If you can’t make it to the brewery, the beer is widely available at restaurants, bars, and grocery stores across Long Island and the metropolitan New York area. 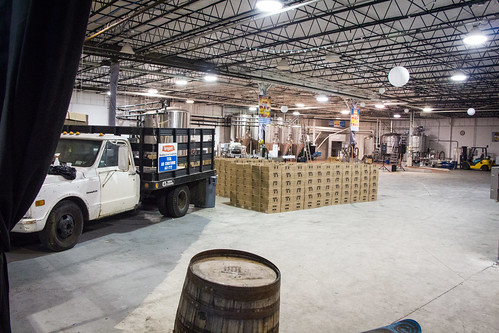 I’m glad we had a chance to stop in and visit Great South Bay Brewery. All the beer I tried was top-notch, especially the darker more complex ones. I’m glad to see them expanding so their beer can hit more markets. Perhaps one day I will find their beer available on store shelves back home in Rochester, NY. In the interim, I will gladly return the next time I find myself down on Long Island, empty growlers in hand!

We were back on Long Island for a wedding and had the chance to re-visit Great South Bay. As on our last trip, there was plenty to try. I continue to be impressed by the diverse offerings at the brewery. 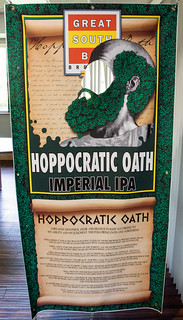 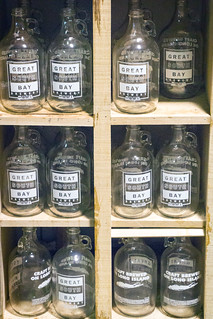 Once again there were a lot of good things to try at the brewery. I was really impressed by the pumpkin beer and made sure to bring some home for myself and the local homebrewer’s club. I will be return again the next time I am on Long Island for another update.

A trip back to Long Island for us means an opportunity to visit Great South Bay and some of our other favorite breweries. Greg, the head brewer, was behind the tasting bar and ready to showcase some of the latest beers on tap. 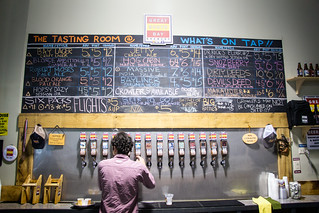 I came out of the tasting flight very impressed by all that I had. From standards such as the Bay Lager to one offs like Hog Cabin, they were all very well made and refreshing. I normally gravitate towards the darker beers so the Hog Cabin Maple Bacon Porter was right up my alley. Of course, I would be remiss if I did not mention the two sours: Bayliner Weisse and Devil’s Deed. Both had just the right amount of sour notes to make for a refreshing beverage. If you recall, the Devil’s Deed was previously available as a higher ABV beer. This version still manages to maintain all of the flavor while restraining the alcohol punch of its former iteration. 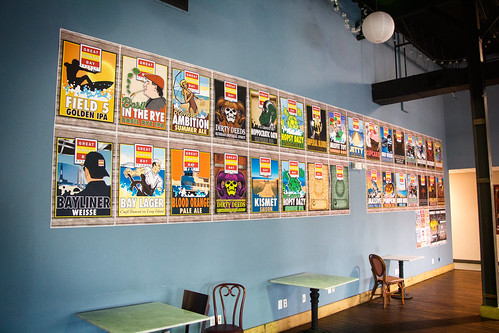 The biggest change at Great South Bay since we were last there is the addition of a crowler filler. Crowlers are actually 32 ounce cans, filled and sealed right in front of you. They are a neat idea but unlike a growler, once you open them up, you must finish the beer in one sitting. Besides selling crowlers, the brewery has also started to can some of their beer in addition to the bottling line they already have. This is a huge opportunity for them as it makes their beer more accessible in places that don’t allow glass containers.

As on previous occasions, I enjoyed my time at Great South Bay. The tasting room remains spacious, with gaming opportunities such as cornhole. Or, if you’re like us, just bring a deck of cards and hang out while you enjoy a pint or two of excellent beer!

While down on Long Island, we made one more brewery stop at Great South Bay. Sure enough, there were plenty of new beers to try. Tyler and Michelle took us through the tasting. 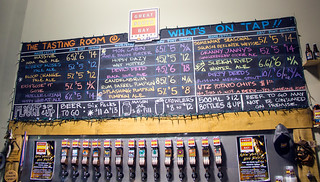 My favorite beer in the tasting was the Gingerbread Cookie Ale. It was extremely unique and makes for an excellent dessert beer. We also made sure to have some of their Dirty Deeds Russian Imperial Stout while we were there. This beer is now sold in 4-packs so you need not worry about finishing an entire growler of this higher ABV beer in one sitting! Great South Bay has also increased distribution and can be found throughout New York, including some of the beer stores near me.

Great South Bay is always a fun place to visit. We like to bring a deck of cards and relax in their tasting room while enjoying a pint of some great beer. Be sure to stop in if you are ever in the area.

Bay Shore, New York is one of the oldest hamlets on Long Island. After visiting the brewery, check out the Gibson-Mack-Holt house, run by the Bay Shore Historical Society. The house was built around 1820 and is an example of a typical tradesman’s house from that era. It contains restored rooms as well as exhibits about the history of Bay Shore. Being a history buff, I hope to visit the museum the next time I am in town! 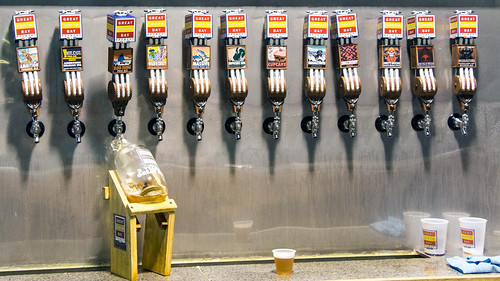