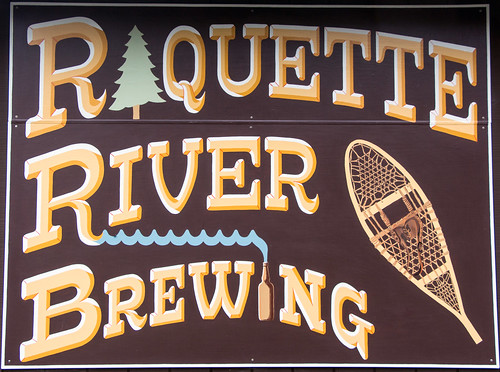 The search for a good pint of handcrafted beer has gotten a little easier for folks driving through the Adirondacks this year. Raquette River Brewing, in Tupper Lake, New York is hoping to make a name for itself by brewing quality beer with fresh ingredients. I was glad I spotted this new brewery while driving to nearby Rollins Pond for our annual camping trip.

Raquette River Brewing opened for business in March of 2014. Located in a small building right on the edge of the town of Tupper Lake, the brewery at first glance was easy to miss, and if not for some signage off Route 3 would have been passed by entirely. Outside the rustic looking building, there is a “Free Library” attached to one wall where folks can trade books. This is a great idea for the community and we actually have a few free libraries around town in Rochester, NY. Once inside the brewery, we were greeted by Mark Jessie, the owner and brewer. At the small wooden tasting bar, we ran through the flight of everything available for purchase that day. 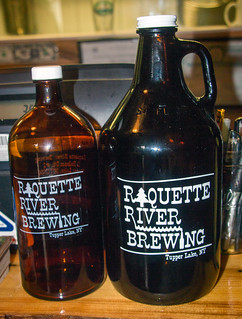 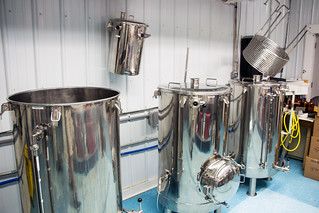 Mark brews on a two barrel system so you should never expect to see too many beers on at one time. After all, their slogan is “Small Batch Adirondack Ales” and this allows Mark to keep a constant rotation of new beer available. While the system may be small, it is also hi-tech. The equipment is attached to a brewery control system so Mark can easily monitor temperatures and more throughout the brewing process. Before opening Raquette River Brewing, Mark was a homebrewer for over 20 years. He decided it was time to give back to the community and when family property became available, he opened a brewery on it. In time, he expects to expand and have the brewery take up even more of the property since all the land is available for use. 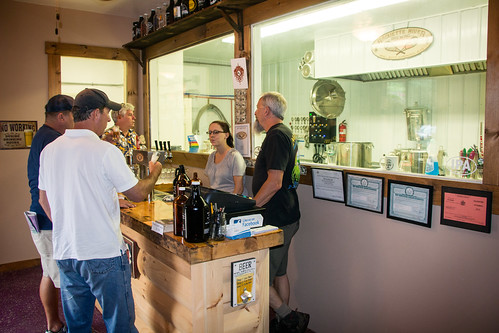 The beer we tried was all well crafted and satisfying. The standout for me was the Red Ale, which had a real heavy smokiness that made it unique and delicious on a hot summer day. The smoked Red Ale is also the most popular beer he makes. Most of Mark’s brews are ales and he has a few wheat beers lined up as well. He is an IPA guy but continues to expand to present other offerings as well. Two of his recent beers that I would have loved to try but were unavailable include Strawberry Cilantro Wheat and Orange Coriander Wheat, both very popular in the community. Mark also has plans to brew a Maple Porter made with local Adirondack maple syrup. 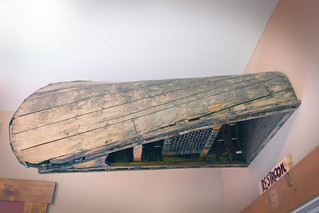 The tasting room is small but functional, with enough Adirondack paraphernalia such as the kayak sticking out of the wall to remind you of the region you are in. Besides beer, the brewery sells t-shirts, sweat shirts, hats, hoodies, and even coasters made from postcards. If you have a dog, Mark makes dog biscuits from the spent grain and they are available at no charge. One item to note is that they will only fill their own growlers. However, Mark has been known on occasion to trade empty growlers so you may be able to add something new to his collection. Be sure to bring one from an interesting brewery in another area if you want to attempt a trade. Currently, the tastings are free and they usually have around five different varieties to try. 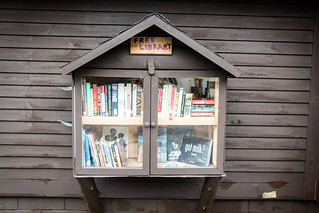 If you want to enjoy Raquette River’s beer, a trip to the brewery is in order. Mark has turned down over 30 bars and restaurants that wanted to carry his product. Mark brews for the local community and wants to keep things small so he can continue to innovate and put out quality ales. Most of his hops come from the Northwest US but he does have plans to start using New York hops when they become a viable option for him.

While Raquette River Brewing is fairly new to the scene, from what I have tasted I think they will do just fine. The beer was very good and Mark plans on putting out some innovative and creative recipes throughout the year. I am glad to have found this brewery so close to my yearly camping destination and will definitely be returning next year to see what new and interesting things the brewery has crafted!

We were excited to return to Raquette River as Mark Jessie, the brewer, had told us there were big plans in the works; plus the beer was all excellent. Driving up to the brewery, we already saw how much progress had been made since last year, with the addition of a large outdoor seating area with room for a food truck, as well as more parking for customers. Mark greeted us at the tasting bar and we went through a flight of his current creations. 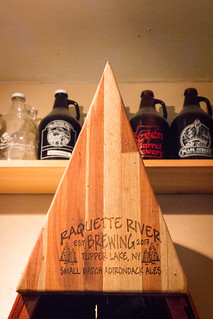 Besides these new to us beers, we re-sampled the Blonde Ale, Pale Ale, and IPA, which were just as good, if not better than our first visit. The tasting room was quite busy, with a constant flow of people coming and going, buying growlers or pints to drink with the Bar-B-Que sold on the patio.

Mark’s most popular beers are currently the Orange Coriander Wheat and Strawberry Cilantro Wheat. While still just distributing out of the brewery, he has had to hire another part time brewer, Jack Lewis, who works with him three days a week. Jack brings over ten years of brewing experience to the table and has been a tremendous help in keeping up with demand. A new seven barrel system is in the works and will require a major expansion of the brewery to accommodate it. 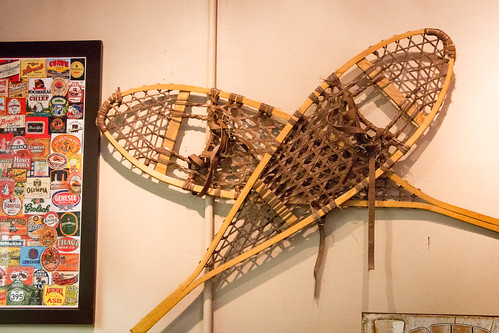 Raquette River has been involved in some exciting projects since last we went there. For instance, over the winter they bottled some of their beer. This was a huge hit with patrons and they hope to do it again in the future. In other news, they brewed a Birch ale in conjunction with Cornell University. I for one never even knew that Birch trees could be tapped for sap, but learned that it has many uses. The beer was a success at the International Birch Conference and Mark is considering making more of it in the future.

I strongly recommend getting out to Raquette River Brewing if you are in the Adirondacks. The beer is great, and you can now sit outside and have a pint while eating some Bar-B-Que. On the weekends you can enjoy live music performances. I am excited to return again next year to see what else the future has in store for Raquette River.

On our yearly trek to the Adirondack region of New York, we always make sure to stop in at Raquette River Brewing to try some new beer and find out how things are going. Last year, we saw the addition of expanded outdoor seating and this year it was the interior which had undergone considerable work. We spoke with Jack Lewis, the head brewer, while discovering their latest line-up of beer. 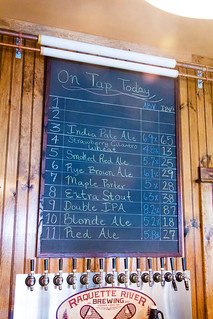 I ended up writing a bit about all the beer we tasted because we noticed many of the recipes had been tweaked and changed slightly since our last visit. I enjoyed the Extra Stout for its full body and robust flavor. One of my previous favorites, the Strawberry Cilantro Wheat was on tap during our visit; but I felt like some of the cilantro notes that I loved so much the last time were much less prominent in this batch. The current cost for a tasting flight is $5.00 for four 4-once pours.

While talking to Jack, we learned that the interior of the tasting room was updated this past winter. Their next expansion is an additional building which will be used primarily for keg and grain storage. Raquette River is going through twice as much beer as they did last summer and had to upgrade to a ten-barrel system. They also now have their own complete bottling line which allows expanded distribution to many restaurants, bars, and grocery stores through the region. 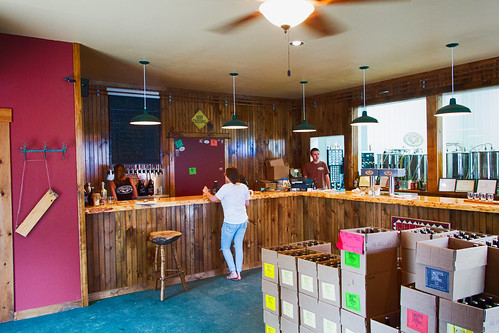 When asked about some upcoming beer recipes, Jack told me they are currently working on a salted caramel porter and a Munich Helles. I would love to try the porter and only hope that it might still be around when I visit again. They had produced a Golden Belgian Strong which was extremely popular and didn’t last very long. The last beer he mentioned is a dark Belgian which has been slowly aging but didn’t have an expected release date.

I enjoy seeing the expansion and improvements done at Raquette River each time I drive through Tupper Lake. The tasting room and outdoor patio were extremely busy with people enjoying food from a local food truck to go with their beer. Perhaps one day Raquette River might even see distribution outside the Adirondack region. Until then, I will make it a yearly stop on my journey through the area.

Raquette River is 146 miles long and is the third longest river in New York State. Ample opportunities exist on the river for kayaking, boating, and fishing. With plenty of access points, you can easily plan a day trip and paddle down the river, enjoying the breathtaking natural beauty that this region of the Adirondacks has to offer. 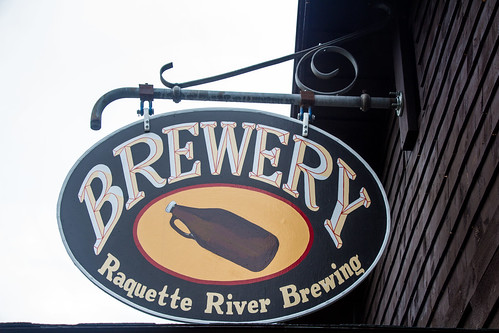