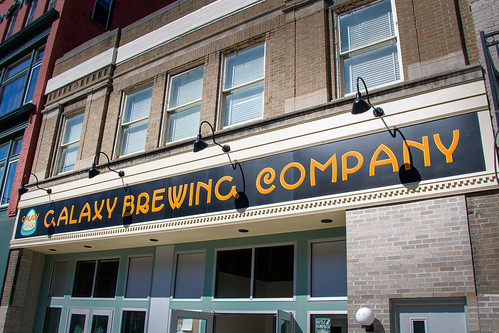 When Arthur Dent heard that Earth was going to be destroyed in Douglas Adam’s science fiction novel The Hitchhiker’s Guide to the Galaxy, he at least got to enjoy one final beer at the local pub. Don’t panic! In Binghamton, New York Galaxy Brewing Company is producing some excellent, well crafted beer with a celestial twist.

Galaxy Brewing Company, founded in 2011 has been a growing force on the beer scene in New York State. Started by the father / son team of Mike and Seth Weisel, the brewery makes quality beer that is well worth checking out. We sat down at the expansive bar and ordered some flights to enjoy while discussing the beer with Seth and Mike. 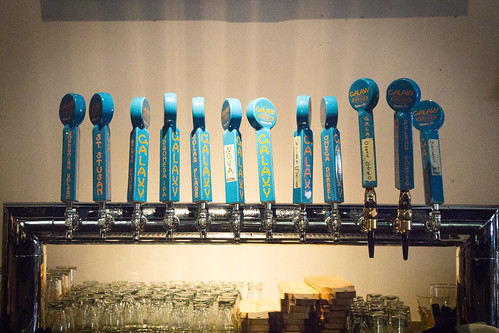 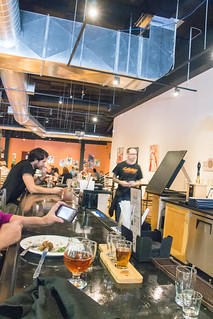 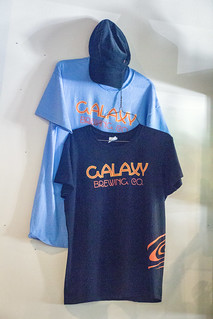 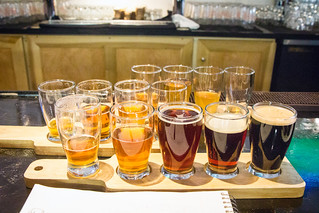 As you can see, Galaxy Brewing Company offers up quite a diverse selection at any one time. Sampler flights have a limit of four choices so you may find yourself purchasing a few flights if you want to try all their diverse offerings. I have had Galaxy on tap back in Rochester and the beer was fresher and more delicious here at the source.

With so many beers to choose from, it is hard to pick just one or two favorites. In terms of popularity, both Andromeda IPA and St. Stusan come out at the top. I agree, these are both fine beers and often find their way into my fridge at home. The craftsmanship shines through on these and others such as the Omega Dubbel, a dark Belgian ale. Galaxy manages to perfectly blend the flavor and aroma profile of the Belgian yeast with beautifully restrained hop usage to create a wonderful, complex flavor profile.

Galaxy Brewing Company opened up to the public in August of 2013. The building they are situated in has been around since the early 1900’s, and a fire almost destroyed it in 1925. The dining room is dedicated to the memory of one of the firefighters who lost his life while fighting the blaze.

Across from the main bar, panes of glass overlook the brewing operation. Galaxy has a ten barrel system which is able to supply plenty of beer to the restaurant as well as distribution throughout New York State. 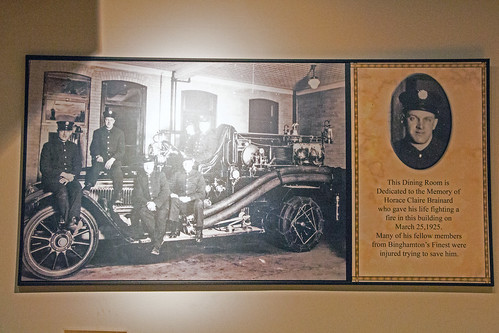 Walk across the old wooden floor, through the dining room, and check out the alien symbols on the restroom doors. This kind of humor shouldn’t surprise you as both Seth and Mike are huge fans of The Hitchhiker’s Guide to the Galaxy. The story goes that they came up with the brewery’s name while having a vigorous discussion over a pint or two of Belgian beer. Seth started twirling his glass, and soon a spiral galaxy formation appeared in the foam, thus hatching the idea. This theme has given rise to the use of space related terminology in the names of many of their beers. And of course they had to include #42 as it is the answer to the ultimate question of Life, the Universe, and Everything! 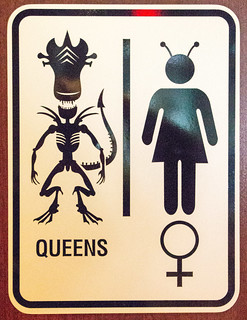 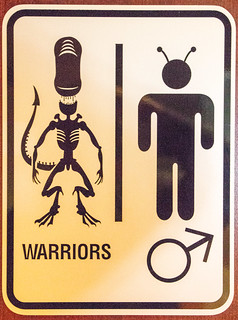 At Galaxy Brewing Company, Seth and Mike keep everything running smoothly. Mike is in charge of “quality assurance” and handles the business end of the operation. He likes to think he taught Seth everything he knows about beer, especially since he was a homebrewer for 40 years. Seth took his new found passion for brewing and went to UC Davis to participate in the Master brewing program. The experience Seth gained at school is reflected in the quality of the beer available at the brewery. 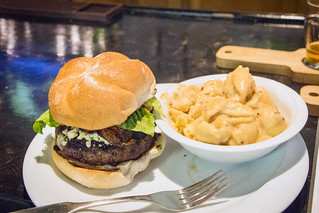 Seth and his father Mike wanted to make sure that Galaxy was a place where people could order a great meal with their beer. They hired Brian Lovesky, a Culinary Institute of America grad, as the head chef. There are several delicious offerings on the menu, many of which also make use of beer, such as the Mac and Cheese prepared with St. Stusan. A local bakery also bakes beer bread for them, which is sometimes available with your meal at the restaurant. While at the brewery, we ordered the Bleu Planet Burger and the House Roasted Pulled Pork. Both were reasonably priced, very flavorful, and filling. The pork is actually locally raised and the spent grain from the brewing process is given as feed at the farm.

Galaxy Brewing Company offers a full line of distilled spirits for those who do not want beer. All the artwork on the wall is rotated out on a regular basis and is available for purchase. The usual shirts, hats, and growler fills are also sold here. One thing I liked was the use of a digital sign to show what beer is available. This lets them keep the listing up-to-date on a regular basis without having to deal with messy chalkboards. 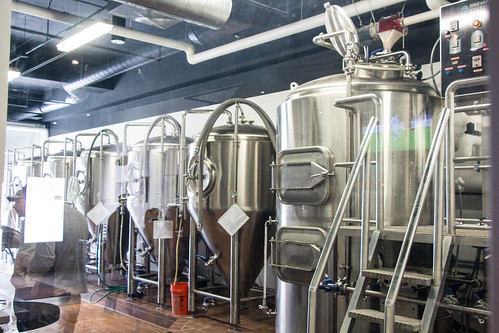 Mike is really happy with where the business is going. After retiring as a Biology teacher, he loves his new career choice. He and Seth hope to be canning their beer within the next year, as well as further expanding the distribution of their draft offerings. The #42 ESB is Mike’s recipe and is also his favorite style to work with. They have also done some interesting recipes involving barrel aging and get all their barrels from Finger Lakes Distilling. The whiskey saison they had was nice, but a little too heavy on the barrel side of the flavor spectrum; although a batch they sent up to Rochester was much better balanced.

Galaxy Brewing Company wants to get more involved with the beer enthusiast community. For example, Tuesday nights will be meet the brewer night where folks can come pick the brain of Seth and enjoy a pint or two as well. They will also be doing special beer and food pairings that accentuate the different beers while offering specialty cuisine. 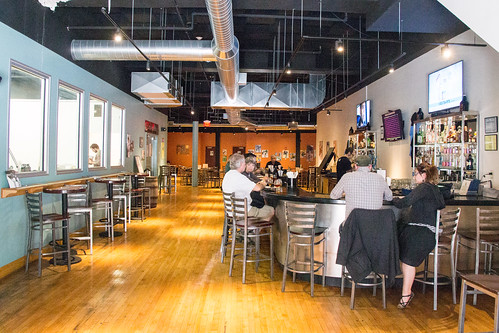 With so many delicious beverages to try, Galaxy Brewing Company is a “must visit” destination while in Binghamton, NY. Parking may be a bit tricky since it is located downtown but well worth finding a spot for. If you see Mike or Seth, stop by and chat with them as their enthusiasm for the brewery is infectious.

It has been nearly eight months since we last visited Galaxy Brewing Company in Binghamton, NY. While driving through the area we needed to grab a quick bite, so we stopped in to chat about the brewery and see what new developments had come about since our last trip.

Like on our previous visit, Joe the barkeep greeted us and showed off the expansive menu of offerings on tap. I was floored by the large tap list and happily surprised to see quite a few that we haven’t had a chance to enjoy before. While trying out the new brews, we chatted with Joe and Mike Wiesel. As you may recall, Mike and his son Seth started the brewery together. 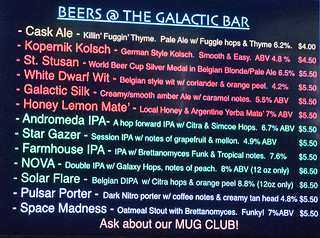 I was once again delighted by the diverse range of offerings at Galaxy. Not one beer was poorly made and all are worthy of your time. I am glad to see that they continue to push the envelope with such unique offerings as the Honey Lemon Mate’ and Killin’ Fuggin’ Thyme. What really excited me was the Farmhouse IPA as I have had very few IPAs that utilized Brettanomyces to create them. When I asked Mike why they decided to create this he said their goal was to figure out, “How can we not be like everyone else?” Well, the Farmhouse IPA is one such result of this philosophy and it seems to be working quite well. 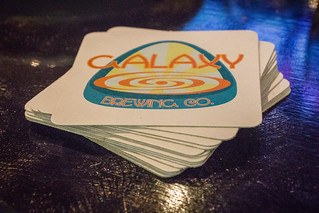 Distribution has increased greatly and Joe showed me a huge seven page list of the many places their beer is now shipped to. Galaxy is expanding greatly and so far has been able to meet demand. A collaboration beer with four other upstate NY breweries, The North, Roosterfish, Wagner Valley, and Water Street Brewing, was just released. It is a Rye Saison that was aged in red wine barrels from Wagner Vineyards. It wasn’t ready during our visit but definitely sounds like something worth checking out. Another beer that will soon be available is Valence, a Rye Whiskey barrel-aged Belgian Tripel. I love seeing so many breweries experimenting with aging their beer in barrels. They can impart a unique and interesting flavor component if done correctly.

There have been some changes and projects planned for the brewery itself as well. In the fall of 2014, Galaxy started a mug club which has been hugely popular with the local community. As one of the benefits, Galaxy has a special bottle share on Wednesday nights where folks bring in beer from other breweries to share with the club members. I can imagine that this also helps the brewery to gauge the interest of patrons for certain styles of beer when designing future products. The restaurant is also adding a patio which might already be open by the time you read this article.

I look forward to my visits to Galaxy Brewing Company. Every time I go, there is a nice selection of new and interesting beer to try. Mike and Seth continue to push the envelope with intriguing flavor combinations and it is a real treat to drink their beer fresh at the source. I will continue to stop in any time I am driving through the Binghamton area and recommend that you do so as well!

The Spiedie, an Italian bread sandwich with grilled, skewered cubes of marinated beef or lamb, is a specialty of Binghamton, NY. The name is pronounced “Speedy.” Otsinengo Park hosts the annual Spiedie festival every August. Be sure to try one the next time you are in Binghamton! 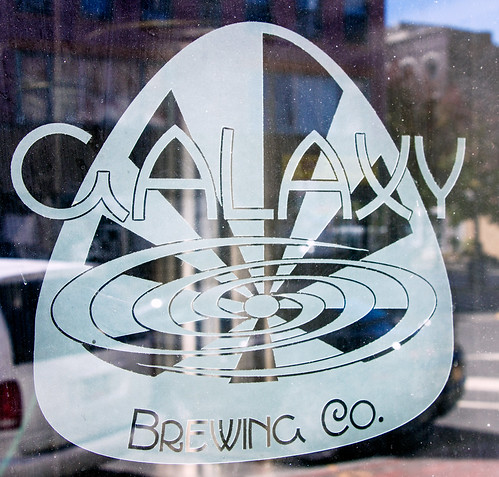