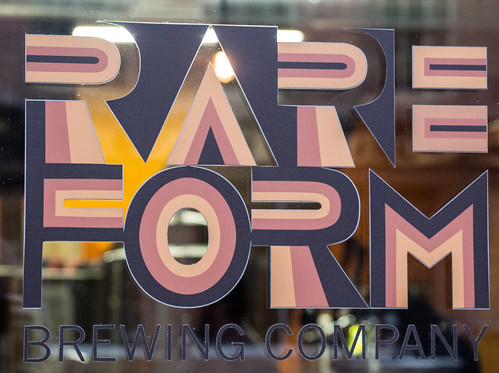 Troy, New York, just north of Albany, is quickly becoming a poster child for the “New Urbanism” movement that is taking place across the country. With beautiful architecture, attractive waterfront, and an interesting history, Troy is blossoming and attracting all sorts of new businesses. Rare Form Brewing Company, which opened in May 2014, takes full advantage of Troy’s revitalization and is introducing some quality beers to the city.

Rare Form Brewing Company is located on a relatively busy street in downtown Troy. Being in the city, parking was a bit tricky but our perseverance paid off and soon we were walking into the brewery. The location is very inviting, featuring a large half octagon-shaped bar with beautiful woodwork taking center stage. The color scheme of the wood actually matches the colors used in their logo. The brewery also has some scattered seats and tables that invite you to relax and enjoy a pint as music plays unobtrusively in the background. The playlist during our visit was fun and modern and would appeal to a range of visitors. We sat at the bar and spoke with Greg, a self-described beer junkie and also our bartender for the evening. Eight of their beers were on tap for us to try while learning more about the brewery. 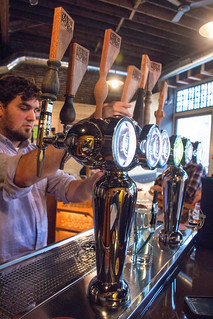 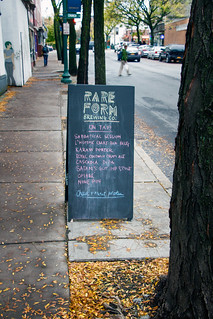 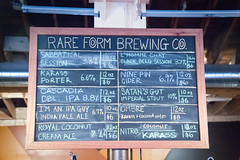 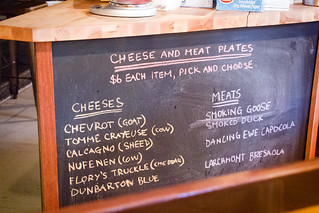 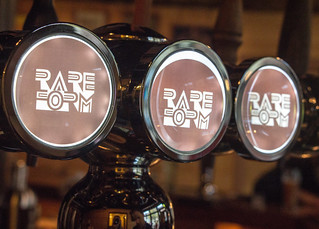 Rare Form has a nice selection of beer on tap to sip and enjoy. My favorites were Satan’s Gut Oak-Aged Imperial Stout and the Royal Toasted Coconut Cream Ale. I’ve always been a fan of big bold stouts and Satan’s Gut clearly fits the bill. Currently, it is aged on whiskey-soaked American oak but they eventually hope to age it in full sized oak barrels. The coconut cream ale was a very nice surprise; I have never had a beer before that has been aged on toasted coconut. The flavor was bold and certainly unique. Greg let us know that the brewery tends to make more hop-centric beer but everything we tried was very well balanced, with the exception of I’m An IPA Guy, which I found to have too much cattiness for my liking. At the time of our visit, the most popular beers were the Royal Toasted Coconut Cream Ale and the Sabbatical Session Ale.

Rare Form Brewing is a New York farm brewery run by Kevin Mullen and Jenny Kemp. Kevin is also the head brewer and works alongside Jamie Caligure, originally from Cave Mountain Brewing Company. Kevin and Jenny moved to Troy, New York from Seattle because they found the community to be vibrant, cool, and affordable. 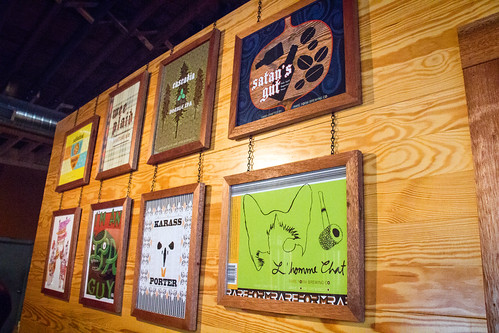 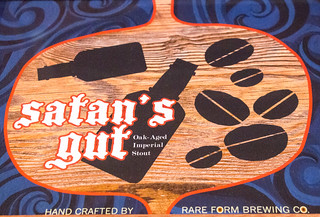 In a fun and different twist, many of the beer names are inspired by the artwork and not the other way around. Multiple artists have contributed their talent to create labels for the brewery. In fact, posters of the artwork are available for sale on the website with all proceeds going directly to the artists!

The look of the brewery complements the Troy art scene very well. One of the aspects I like about the brewery’s layout is that the brewing equipment is visible directly behind the bar. If the brewers are working, you have a clear view of the beer-making process! 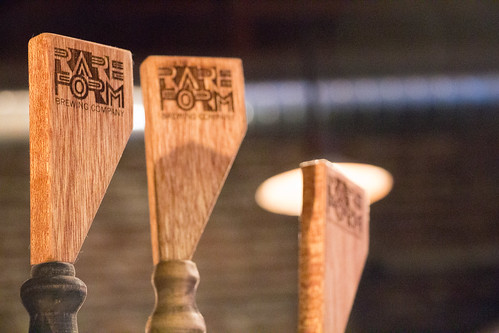 Kevin Mullen has been brewing for quite some time as a homebrewer. In fact, he’s been perfecting the recipe for Satan’s Gut over the last ten years. The brewery operates at a five barrel capacity which allows them distribution outside the brewery itself. Their beer is available locally in Albany, Schenectady, and the surrounding areas. During the 2014 holiday season, the brewery had plans to bottle their first beer; a barleywine destined for the New York City market. Kevin and Jamie also want to produce a sweet potato and molasses beer which definitely piques my curiosity. 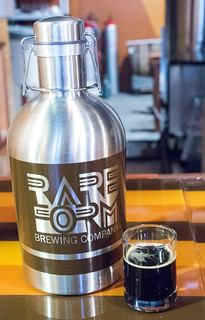 Rare Form has some unique relations with the local community. For one, they give their spent grain to local farmers during the warmer months of the year. Most interesting though is their contribution to nearby Rensselaer Polytechnic Institute (RPI). At the RPI, bioengineers are working to convert their spent grain into biofuel! This is amazing research and I love to see how a local brewery is helping to make a difference that could have a lasting impact on the whole world.

At the brewery, pints are offered for sale, but there are no official sampler flights. However, they will gladly accommodate you with a few tastes to help you decide. Rare Form also sells hats, t-shirts, and even metal growlers. If you get hungry, locally sourced cheese and meat trays are available. Growler fills have an average price running around twenty dollars for all beers on tap.

I am very glad that we discovered Rare Form Brewing Company while visiting Troy, New York. We ended up stopping in twice during our weekend vacation because of the great beer that they had on tap. If you go there, ask to try the “Ombre” if it is available. The Ombre consists of a layer of the coconut cream ale and robust porter. I’m looking forward to future chances to have their beer again the next time I swing through the area. 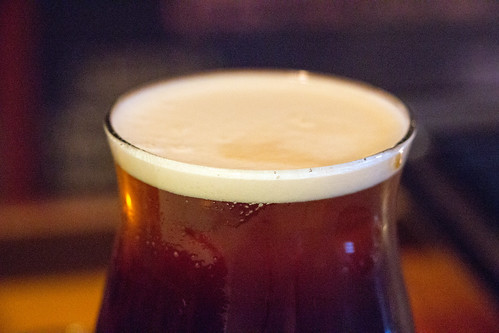 Troy, New York has been associated with Uncle Sam since the War of 1812. Sam Wilson, a meat packer always had to stamp each barrel with “US” before shipping it out to the field of battle. Soldiers thought of these as Uncle Sam Wilson’s rations and soon the story grew to mythological proportions. This eventually resulted in the fictionalized image of Uncle Sam as the red, white, and blue clad icon of America. 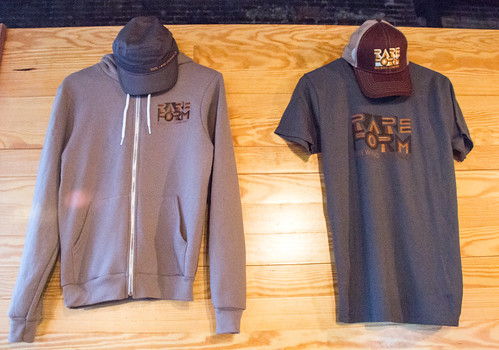