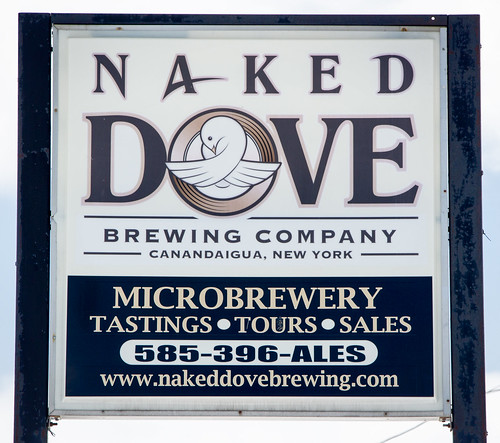 For those who live around Rochester, NY and the surrounding Finger Lakes region, we are blessed with a plethora of wineries, breweries, distilleries, and more. One of these breweries, Naked Dove Brewing Company located in Canandaigua, was long overdue for a visit from Liquid Alchemy. We stopped by to get the inside story on their past, present, and future.

When we arrived at the brewery shortly after they opened on a Sunday afternoon, the tasting room was already full of people eager to explore the diverse range of beers that Naked Dove offers. Don Cotter and his wife were running the room and were very accommodating in answering all our questions followed up by a tour of the brewery itself. Don was a wealth of information not only on Naked Dove but the beer industry as a whole, and his enthusiasm for their beer was infectious. We sampled the current flight of beers offered, including a special limited edition release of their Russian Imperial Stout aged in oak barrels! 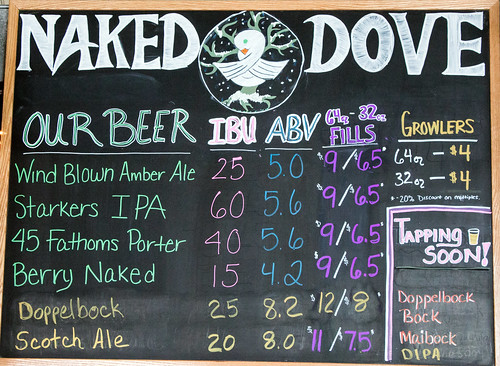 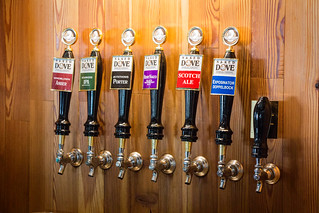 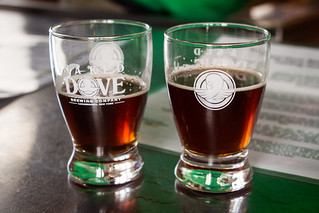 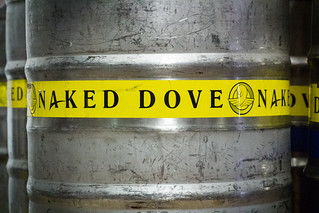 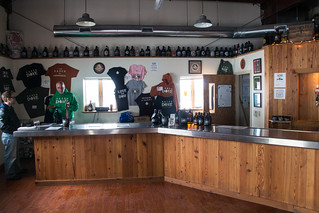 Naked Dove was established in November of 2010 by Dave Schlosser, Don Cotter, and Ken Higgins. Dave, the head Brewmaster truly knows his craft and his expertise shines through on every beer offered at the brewery. Along with the other brewers, Bruce Lish and Jen Meyers, Naked Dove is producing some truly outstanding beverages that are well balanced with lots of nuanced flavors. Dave has actually worked in the beer industry for many years, having brewed at Rohrbachs, CB Craftbrewers, and Genesee. In fact, while at Rohrbachs it was Dave who came up with their well-known Scotch Ale recipe. According to Don, Dave did not feel the need to produce a Scotch Ale at Naked Dove but customers and co-workers wanted him to make one. Finally, after a year of being in business, he brewed a batch which sold out so quickly that it convinced him to make it more often. 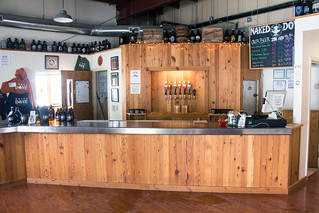 One of the things you may notice about the higher alcohol beers at Naked Dove is that they are deceptively smooth. Dave is known for crafting these higher ABV beers in such a way that you get all of the flavor but none of the burn. The brewing team strives for balance when designing their recipes, always going for beer that is true to style and easy to drink. Dave loves malty German beers so they tend to make a lot of lagers and Bock beers. The IPAs are a gift to the customers as they are not the brewer’s preferred style to work with. However, you couldn’t tell that from the ones we sampled because they were all well-made and delicious!

Don moved to New York from Seattle 15 years ago. During this time, one of his jobs was at Genesee Brewing where he and Dave started the Dundee line of beers. For him, Starker’s IPA was a game changer. Up until that beer was produced, Don was still working his day job at Genesee. This beer was so popular that he decided to quit the corporate life and devote all his time and attention to Naked Dove. After all, “Why do for others when you can open your own brewery and do it yourself!” Don exclaimed. 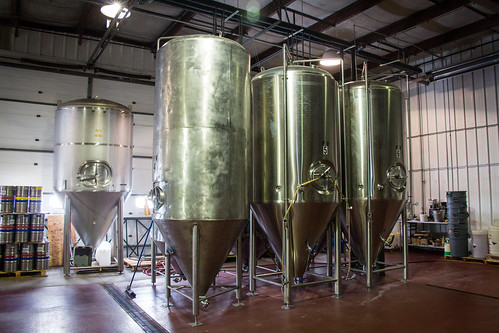 Naked Dove runs on a 15 barrel system so it is well equipped to supply the tasting room, local restaurants, bars, and a few retailers such as AJ’s Beer Warehouse in Henrietta. They are a self-distributing brewery, with a small 30 mile distribution radius mostly in the southern half of the Rochester region. Interestingly enough, Naked Dove also has the equipment for a bottling line that they have never used! The brewery continues to hit all of its growth targets and as such, has not felt the need to start bottling yet. While not a NYS farm brewery, Naked Dove does use local hops when they can, and get most of their malt from the Midwestern US grain belt. 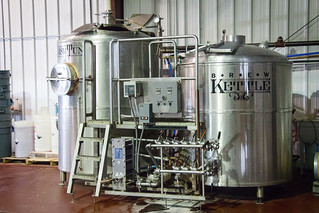 Coming up with the name Naked Dove was the result of a lot of trial and error according to Don. The team knew from the get-go that they wanted to be in Canandaigua and were thinking of first calling it “Kanandarque Brewery,” the original Iroquois name for the region. They thought this might be a tricky word for customers and next considered the English definition for Canandaigua, “The Chosen Spot.” However, there was another business that wanted to trademark the word “Chosen” and Don and his team decided to pursue other options. Continuing to brainstorm names, they even thought of calling it “Service Parts” since the brewery is located within an old NAPA auto parts and truck repair building! Finally, one day while playing around with the names of the co-founders, Don discovered they form an anagram of “Naked Dove.” This was perfect, and together with the shy, modest dove symbol, beautifully represents the brewery with a very unique name. 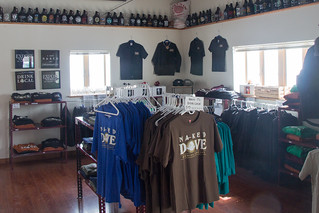 While at Naked Dove, you can purchase a sampler flight of their beers for $4.00. This is a great value since you also keep the tasting glass and get a $2.00 discount off of any purchase. Growlers, clothing, hats, pint glasses, and more are also available to take home. One of the interesting features of the tasting room is a map of the world displaying photos of people enjoying their Naked Dove beer or wearing their clothing all over the globe. It is fun to see where people have been while proudly displaying the Dove. Also, up around the walls are well over 100 growlers from breweries across the country. These are really unique to see and they are always willing to accept new donations if you have a growler from a different brewery to add to the collection.

Having enjoyed Naked Dove beer for many years, I can honestly say that the 45 Fathoms Porter is still my favorite porter in the entire region. It is robust, with excellent chocolate and coffee notes that make for a complex yet never astringent beer. I was pleased to also have the chance to try the Oak aged Russian Imperial Stout. This beauty spent three months in rye barrels from the Finger Lakes Distilling Company. Made in small quantities, this beer will not last long but is further proof of the excellent balance that Dave and his team puts into each of their beers.

Naked Dove is a fantastic brewery to visit while in the area. Conveniently located near other regional breweries and wineries, you could easily make a day trip out of it. Be sure to bring a growler with you or buy one of theirs so you can bring some exceptional beer home with you. I will continue to support Naked Dove and all the well-made beverages that they make! 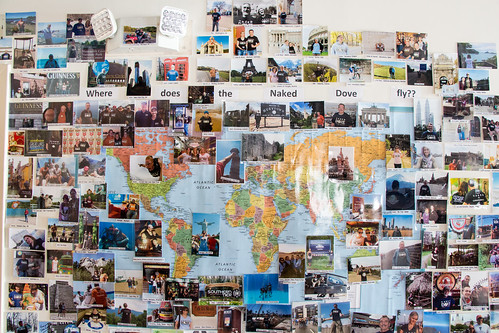 Canandaigua Lake is the fourth largest of the Finger Lakes and is well known for its water quality. In fact, in 2013 the drinking water was entered into a competition and voted the best drinking water in New York State! At the northern end you might also spot Squaw Island, the smallest fish and wildlife management area in all of NY being just 55 feet wide and 145 feet long. 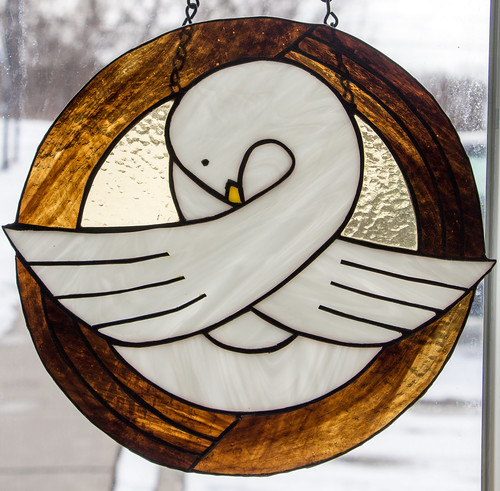