Hyde Park, New York is a great town to visit if you want to see some fascinating historical locations. After visiting the three National Historic Sites for Franklin D. Roosevelt, his wife Eleanor, and the Vanderbilt mansion, you might have worked up an appetite. Look no further then across the road from FDR’s house to Hyde Park Brewing Company. We stopped in to learn their story while exploring the back roads and history of the Hudson Valley.

The brewery and restaurant are located in a large building just off the main road. Walking in, we sat at the long, dark wood, U-shaped bar, noticing that directly above the bar is an exposed area filled with plenty of brewing equipment. There was a nice relaxed atmosphere, with a few patrons hanging out at the bar or seated in the restaurant area. We picked out a nacho platter from the menu and then ordered a flight of all available beer. Andrew at the bar was very helpful in answering our questions about the brewery and its history. 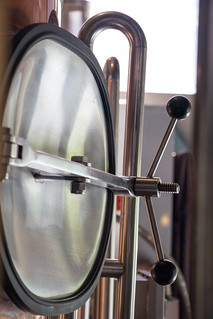 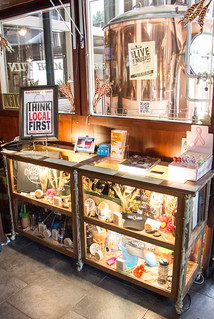 The beer was all solidly made and designed to appeal to a large crowd of beer drinkers. I was surprised that they only serve one dark beer at a time, but I do appreciate the fact that they keep one available at all times. Some breweries stick to one style, but Hyde Park has a pretty diverse portfolio of recipes. Their most popular beer is the Rough Rider Red Ale which I agree was pretty decent. I was surprised though to see that the bar still sells Macro-beers. When I asked Andrew about this, he explained that they have a big local crowd that comes in and some of them still enjoy a macro-brew! 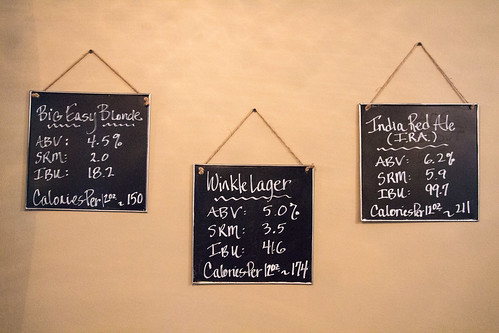 Most breweries post the ABV and IBU of each beer that they produce but Hyde Park takes things one step further. Each beer profile includes the caloric content of one drink! This was certainly fascinating information and I would love to see more breweries do this as I have always wanted to see how many calories are in my favorite beers.

Brewmaster John Eccles brews on a six barrel system and has been doing so at Hyde Park for over twenty years. John learned how to brew beer while working at the Mountain Valley Brewing Company in Suffern, NY. It is interesting to note that he is the grandson of a prohibition era Brewmaster as well as a co-founder of TAP NY, one of the largest beer festivals in NY. John keeps his recipes consistent and as such, does not put out a lot of new beers; only the Barrel 9 recipe changes by the season. While we were there it was a Hefeweizen, but they have also done a Maibock and an Oktoberfest beer. 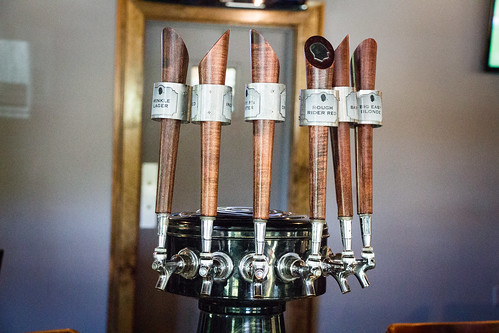 At Hyde Park Brewing, there are plenty of food choices on the menu to tempt your palate. All the sausage they serve are made in-house and they try to use organic ingredients as much as possible. If you order a cheese tray, expect to try varieties from many different local sources. If you care for a glass of wine, some of the offerings are local, such as those from nearby Warwick Valley Winery. Non-food extras include shirts, pints, and growlers. 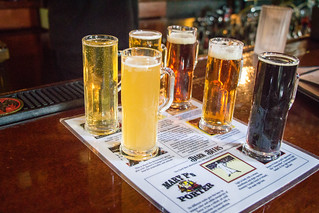 Getting back to the beer, a flight of six will set you back $14.00. This might be a bit steeper than many places but I chalk it up to being in a more touristy area. For the local fans, they also have a pint club which gets you your own 20 oz. glass, special events, and parties throughout the year. Many of Hyde Park’s aficionados also enjoy mixing the different beer styles together to create new concoctions. For example, combining the Blonde and the Red Ale together is quite popular. If you want to try Hyde Park’s beer, be sure to get to the brewery as they do not distribute anywhere else.

I really liked the theme of Hyde Park, with a focus on local history. Even the bathroom doors are illustrated with silhouettes of Franklin and Eleanor Roosevelt. Throughout the week, especially in the warmer months, there are multiple nights of live music and outdoor seating. The bar and restaurant have a nice friendly atmosphere, which is welcoming to both tourists and locals alike. 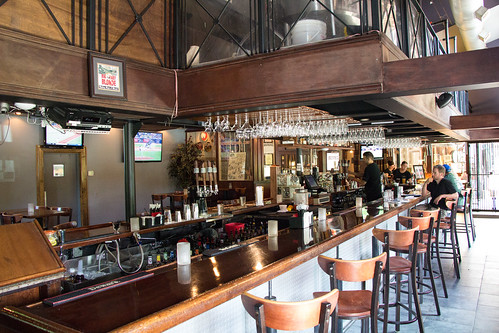 With a silver medal from the Great American Beer Festival, Hyde Park Brewing Company is quite proud of their lineup of beers. Their motto is, “Anytime is a good time for a beer”, a spin off of Franklin D. Roosevelt’s quote, and I couldn’t agree more. After a long day of touring the many historical sites that the area has to offer, be sure to stop in to Hyde Park and try out some of the beer which John Eccles has been perfecting for the past twenty years, as well as some of their delicious locally sourced food options.

Hyde Park is such a hotbed of historical activity that you could easily spend a day or two visiting all the important locations. My favorites are the FDR Site, the Eleanor Roosevelt Site, and the Vanderbilt Mansion. Visiting each one really gives you a feel for a particular era, whether you want to step into the shoes of one of the most influential presidents of the United States, or the life of one of the wealthiest families in the world. If you visit during the winter months you may even find the houses decorated for Christmas! 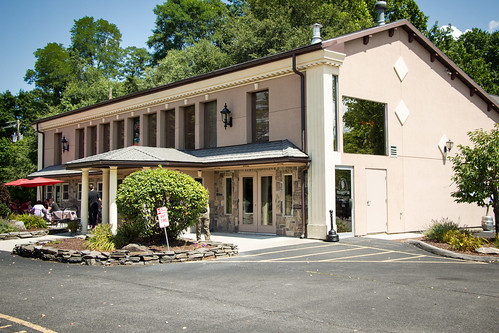