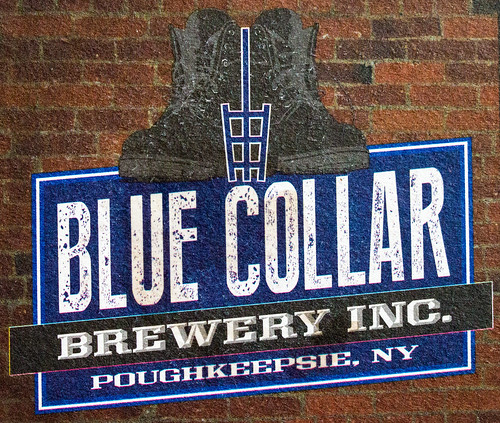 I love it when our travels take us to new and interesting breweries and wineries that may not be on the radar just yet. We arrived in the town of Poughkeepsie, NY and soon found our way to Blue Collar Brewery. Blue Collar has it all; amazing beer, an enthusiastic brewer, and a wonderful atmosphere. Randall Marquis, co-owner and brewer, was behind the bar during our visit so we have plenty of information to share on the blog. 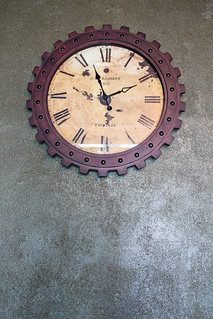 Blue Collar is located within a gorgeous revitalized old building. What once was used as a cold storage facility for meats back in the 1880s, now houses the brewery, bar area, and small kitchen. The interior is very industrial looking with lots of exposed brick walls. Randall and his father Kevin, the other co-owner, took 18 months to completely renovate the building to suit their needs while maintaining the history and atmosphere of the past. There are some photos in the entryway that really show the extent of work that was done to get the building ready for business. I also loved the openness of the second floor which offers additional seating that looks down upon the main bar area. 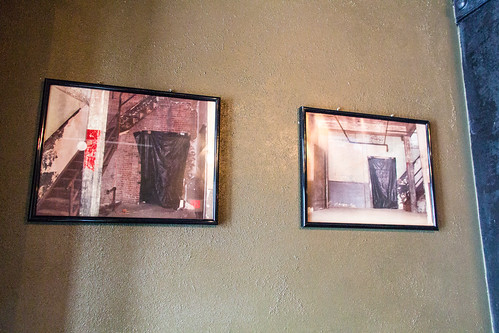 Randall was willing to pour us small samples of his beer, but emphasized the fact that he would much prefer people purchase full pints. He feels this is the best way to truly taste a beer as a small sample sometimes doesn’t do it justice. While I agree with those sentiments, I still think for getting a rough idea of a brewer’s diversity and what is available to purchase, sampler flights are the way to go before buying a pint. However, judging by Blue Collar’s website, it seems Randall has changed his mind since our visit and now serves flights of 5 beers for $10.00. 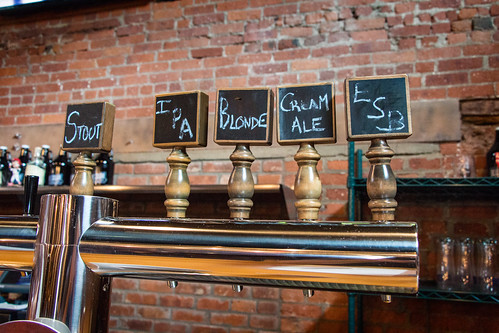 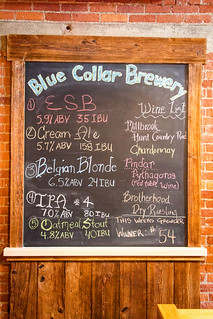 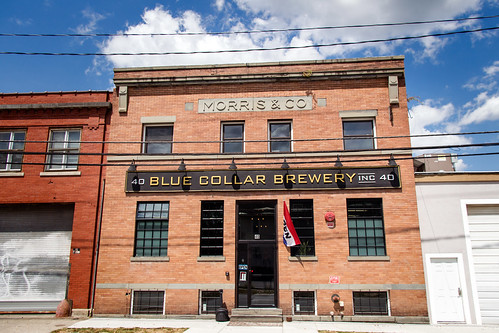 I have to say that all of the beer on tap was solid and very well made. If I had to choose a favorite it would be the Oatmeal Stout, though you could not go wrong with picking any of them. As Randall said to us, “the brewing process is the process.” This is his way of saying he wants to make consistently good beer that doesn’t require lots of finagling to get just right. Just brew the old fashioned way and if your methods are reliable, you can produce some high quality beer. 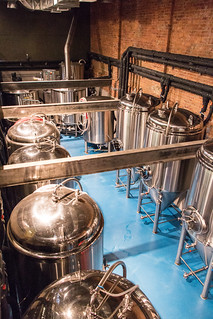 Since Blue Collar only opened in November of 2014, it is still considered fairly new. The brewery has a fifteen barrel system, much larger than many other startup breweries we have been to. With this size setup, Randall only has to brew about once a month right now because Blue Collar does not distribute outside the brewery yet. In fact, when we visited in August, the brewery had only made 16 barrels so far. Future recipes include a Baltic Porter that sounds delicious. He also plans to offer keg distribution soon to get their beer into many of the local restaurants and bars. For now, you need to visit the brewery itself to try their beer.

We also learned that Blue Collar is not a NY Farm Licensed brewery. Randall was concerned about the feasibility of sourcing so much of his hop and grain bill from New York in the future. I think this is a smart move because it seems like New York is still not producing enough to sustain all the different farm breweries that have already popped up. The spent grain from the brewing process is sent to nearby Spring Hill Farm to be used as feed.

Randall went to the University of California – Davis to take part in their brewing program back in 2009. After graduating, he moved to Maryland and became head brewer at Eastern Shore Brewing. He was excited to come back home to Poughkeepsie and open up his own brewery with a focus on crafting quality beer that could be enjoyed by everyone. In fact, the name Blue Collar Brewery was influenced by the many hardworking people who work with their hands all day. For Randall and his father, this brewery was a labor of love as they renovated everything themselves by hand. 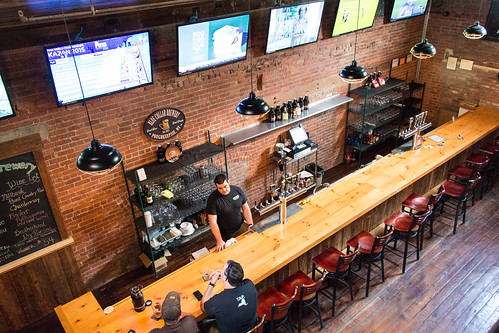 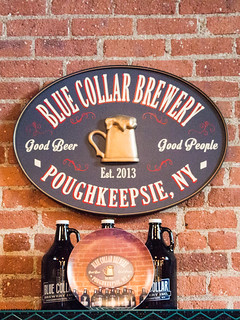 Blue Collar considers itself a sports bar and as such has a long row of televisions situated behind the bar. In fact, the brewery is open seven days a week because there is always some sporting event available that people want to watch. The kitchen is open most of the time too, with traditional options like wings, nachos, burgers, and wraps. The menu even has some more diverse treats like crispy honey pork belly and apple and cheddar stuffed chicken.  Walking past the kitchen to the main bar area you get to see and smell all the dishes that the chefs are hard at work making. Blue Collar also serves New York state wines including some from the Hudson River region. Local distillery, Dutch Spirits is also featured and the lemonade drink they make with their products is even more popular than the wine!

Fans of Blue Collar can also join the mug club which started just a few short months ago. Growlers, t-shirts, and more are also available for purchase. Occasionally the brewery also features live music events. One of the interesting quirks of the brewery is that each beer has the exact same price no matter what the alcohol content is. However, for higher ABV beers, Randall will pour into a smaller glass. This is a great idea and makes budgeting a night out that much easier.

I really love the look and feel of Blue Collar Brewery. During our visit, there was a steady stream of tourists as well as regulars stopping by to have some beer and a bite to eat. Randall loves chatting with the customers, especially when it comes to the beer, and the labor that went into renovating the building. This is the kind of brewery that is well worth going out of your way to visit. I for one will definitely be stopping in again the next time I am down in this part of New York.

While in the area for our yearly trek to the Tap NY craft beer festival, we made sure to stop in at Blue Collar Brewery to learn about any new and interesting changes since last here a year ago. Randall Marquis was once again behind the bar ready to serve us his latest concoctions which we tried while enjoying a delicious platter of nachos with pulled pork. 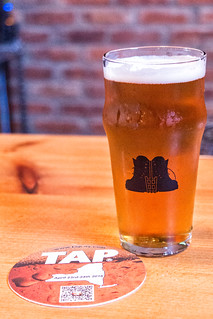 While I enjoyed all the beers in our flight, my personal favorite was the Irish Stout. The beautiful dry finish and subtle roast character made for a delightfully easy drinking beer.

We also had the opportunity to try the Baltic Porter the following day at Tap NY. The porter comes in at a respectable 7.5% ABV and was wonderfully silky and smooth with some dark fruit notes. The Belgian Golden Strong won a Bronze medal in the Belgian Strong category at Tap NY. I’m glad to see the brewery getting this kind of recognition. 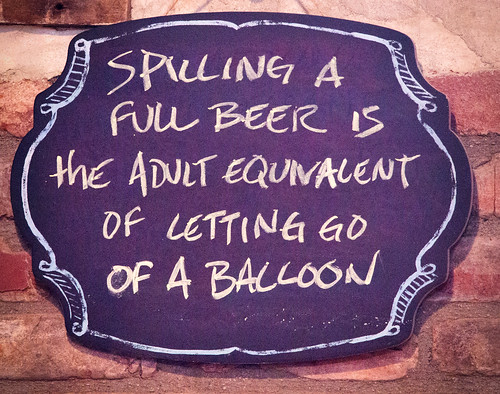 Randall also informed us that the brewery is in the process of building a cold room for keg storage, allowing for easier distribution offsite. While still primarily focused on the local brewery, it is exciting to see Blue Collar gearing up to offer their beer at other locations.

I’m glad we took the time to drive to Poughkeepsie and check out the latest beer at Blue Collar. Randall continues to produce a great product and I look forward to visiting again in the future! 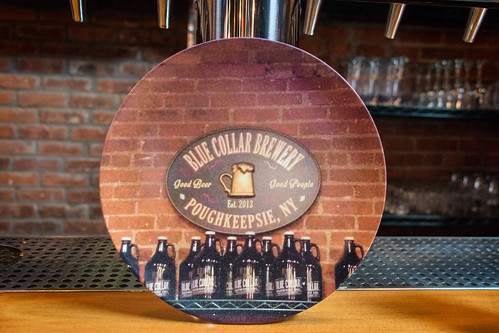 Poughkeepsie is known as “The Queen City on the Hudson” and was New York’s second capital shortly after the American Revolution. The name comes from an Indian word that means “the reed-covered lodge by the little-water place.” Early in its history, Poughkeepsie was a major center for whale rendering as well as a flourishing center of industry for shipping, paper mills, and several breweries. It seems highly apropos to have Blue Collar Brewery make its home here! 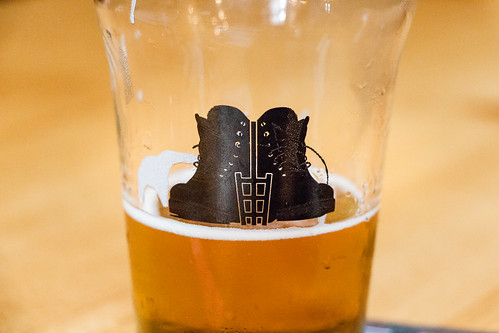