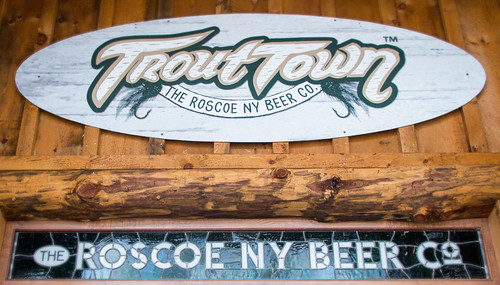 Usually when making a return visit to a site I’ve written about for Liquid Alchemy, a short addendum to the current post is all that is needed. However, in the two and a half years since I was last at Roscoe Beer Company, enough has changed to warrant writing an entirely new article. I was pleasantly surprised and excited by the work that has gone on at the brewery to improve its image and the caliber of beer that is being released.

The tasting room is spacious and reminds me of a cozy Adirondack lodge, complete with plush leather furniture, wood paneled walls, and a fish tank displaying some of the local trout sought out by anglers. I love the attention to detail such as the trees that appear to grow right through the tasting room floor, each surrounded by additional table space and stools. I no longer felt like I was walking into a gift shop, but rather a space where I could relax for a few hours by a warm, peaceful fire. We made our way up to the tasting bar where we met Josh Hughes, the Brewmaster and Operations Manager. He was eager to showcase his creations and let us see how much has changed at the brewery. 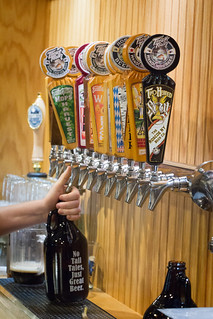 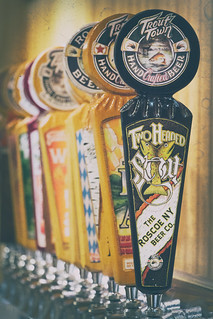 Gone are the days when Roscoe only had one beer available, made for them by another local brewery! Josh brews on a five barrel system, and at the time of our visit was in the process of upgrading to fifteen barrels. Everything served at the brewery is made on-site and Adirondack Brewery is only used to produce larger batches for bottling. I was really impressed by the diversity and selection on hand, with favorites being the Homegrown Hops Harvest and the Two Headed Stout. 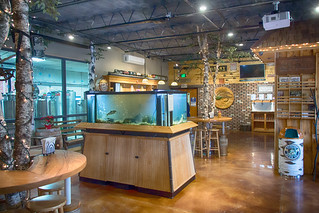 Josh brewed for many years before coming on as Brewmaster at Roscoe. In fact, he had been tweaking and modifying one of his recipes, the Twin Rivers Rye, for years before releasing it to the public. Stout is his preferred style to brew but Josh strives to make something that everyone can enjoy. He is not a fan of fruit beers, so any beer that he creates with fruit will not hit you like a fruit bomb. The flavors are designed to be subtle and well balanced.

With ten different beers on tap, Roscoe certainly makes sure they cater to everyone. In fact, they are one of the few breweries I have gone to that also makes a non-alcoholic root beer. Their root beer is not loaded with sugar and is much easier drinking. At the time of our visit, Josh also had some Two Headed Stout aging in virgin oak barrels. I would have loved to have tried this but never made it back down to the brewery. He is also experimenting with a Barley ale aged in barrels. I’m glad to see that the brewery is involved in innovative projects like these. 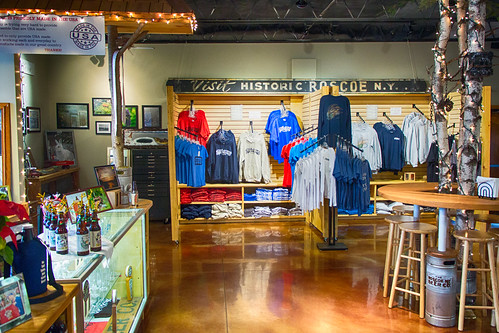 The tasting room is designed with comfort and relaxation in mind. On the weekends, they have light food available from a local restaurant. Throughout the summer months live music is featured, along with the occasional pig roast. A unique feature at the brewery is a self-serve tap wall for when you just don’t want to wait in line at the tasting bar!

Roscoe distributes its beer throughout the local area as well as the metropolitan New York region. With plans to install their own bottling line, I can only imagine that distribution will expand even further. While at the brewery, pints and growler fills are available for purchase. They even sell plastic growlers for the root beer. If you want to try a wider range of beer, a flight of four will set you back five dollars. Local cider, Awestruck, is available for purchase as well. 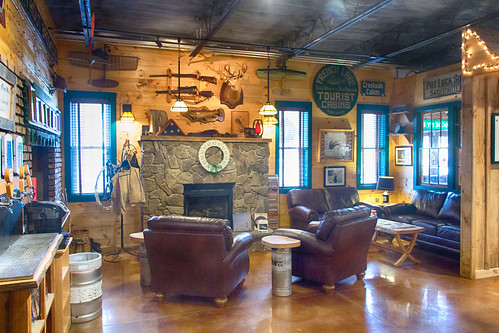 I loved seeing how Roscoe Beer Company went from being a small gift shop selling one beer, to a large tasting room producing a multitude of delicious concoctions. Talking to Josh about the business left me with the impression that Roscoe has no place to go but up. With something for everyone, Roscoe is a convenient stop if you are driving down Route 86 or just visiting the area. I am envious of the local fans that get to hang out in the relaxing tasting room while enjoying a pint or two of beer. And, by selling both cider and non-alcoholic root beer, Roscoe really does have something for everyone to enjoy. You would not be disappointed in a stop at their brewery. Check out the original article here to see how much has changed since my first visit!

Located in a town that is noted for its fly fishing industry, it is no surprise that artists, inspired by the beer industry, designed a Barleyhopper fishing fly. The fly is composed of all the ingredients one would use to prepare beer, minus the water of course! If you are so inclined, you can also visit the nearby Catskill Fly Fishing Center and Museum to reel in some more information on this popular sport. 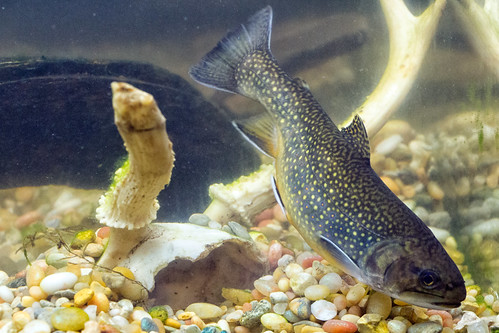