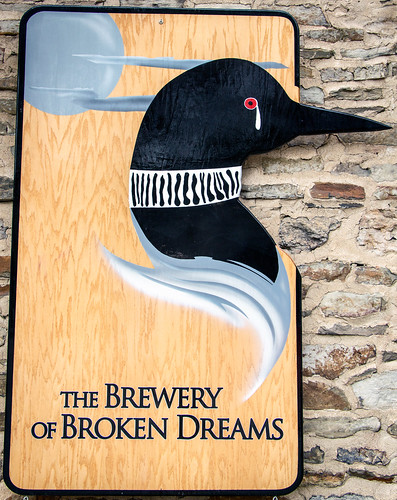 I’ll admit that I am a bit obsessed with loons. Every summer, on our Adirondack camping trip, I enjoy spending hours on the water just observing these majestic birds and listening to their calls. You can imagine my excitement when I saw a brewery logo that incorporated a crying loon at Tap NY two years ago! It turns out that the brewery, The Brewery of Broken Dreams, was located within driving distance from home, at the southern tip of Keuka Lake. We made sure to visit them on our trek around the lake so that we could try their wide selection of beers and learn a bit more about the brewery and the story behind the teary-eyed loon.

The Brewery of Broken Dreams’ tasting room is located on the bottom floor of a multi-story building. The beer is brewed on the upper floors leaving the bottom level wide open for visitors. I loved the meandering tasting counter and the exposed brick and rock walls. It really fits in well with the history of the area. We met up with Doug Schuckers, the manager and head brewer, who guided us through a tasting of beer while telling us the tale of the location and the brewery. 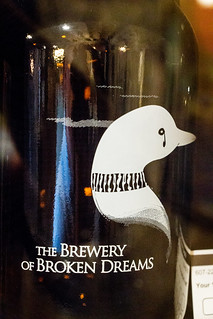 – Unfinished Business
– The Crying Loon
– All 4 One 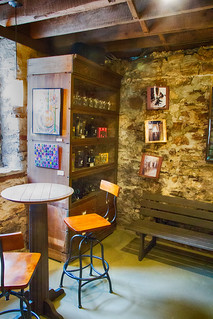 – Old Antics
– Once Upon A Farmhouse Ale
– Floating Leaf 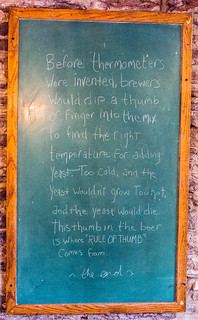 The first thing that might strike you about the list of beers we tried is the inclusion of information describing the amount of New York State ingredients. As a farm brewery, Broken Dreams is required to source a certain percentage of ingredients from within the state and they wish to let people know that. Judging by the examples shown, they are doing a great job! There was not one bad beer in the line-up, but my favorites were the Farmhouse Ale and the Oatmeal Stout. The saison was refreshingly tart and peppery while the stout was chocolaty and chewy. I was also surprised by their Pale Ale as it is not a style I tend to gravitate towards but would have this one again. 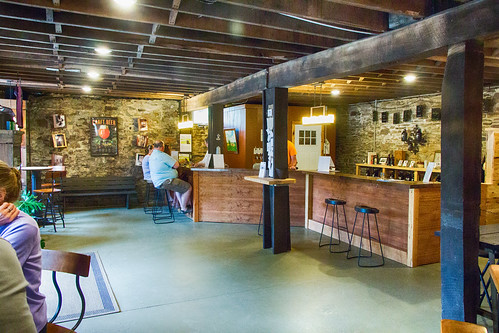 Doug informed me that the brewery officially opened the day after Thanksgiving in 2014. However, he had wanted to launch a brewery for many years before that but it never worked out. The building they are located in is perfect because of its sad history. In the late 1800’s, the Monarch Wine Company was built at this spot, but partially burned to the ground shortly after. A new building was constructed which continued to serve multiple wineries until the 1960’s. At this point in time yet another winery took over the location and manufactured wine until the 1980’s. When that business failed, the building was used for a home brew and wine making shop. Shelly Fisher, Broken Dreams’ owner, along with Doug, found this building and decided it would be the perfect location for their brewery. Doug likes to say that the building’s history mimics their own endeavors trying to get a business started, and that many failures have led to their success. 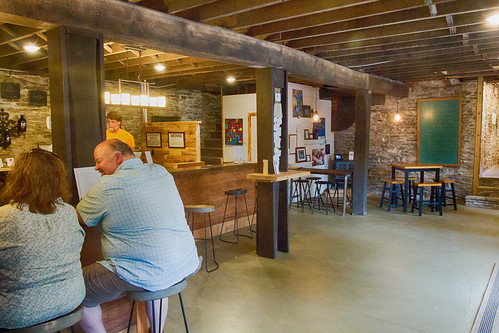 All the failures along the way have only strengthened Doug and Shelly’s passion and determination to make good beer. It’s not for nothing that the brewery’s slogan is “It’s The Tears That Make The Difference!” This has been a dream of theirs for years, and like a loon, dreams have a way of popping up when you least expect them. The call of a loon is beautiful and, according to Doug, “impossible to forget” much like the beer Doug and Shelly are creating. The work they have put into building the tasting room and getting the brewery established has been well worth it. 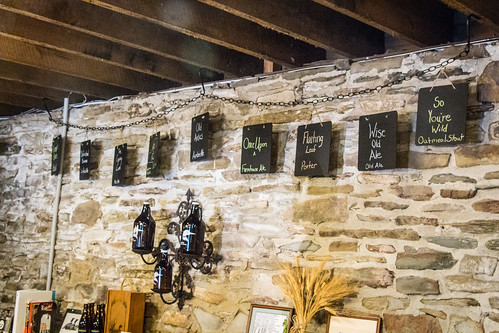 Moving past the trials to get where they are today, Doug and Shelly are already looking to the future. While they currently brew on a three barrel system, the plan is to start producing 500 barrels a year within five years time! Doug had been homebrewing for about 16 years before starting at Broken Dream and has many exciting projects planned. For example, he is going to work with one of the local distilleries on a barrel aging experiment. Toward the end of September of 2016, he will collaborate with the Hands-on Glass Studio to create a Steinbier using hot glass instead of the traditional hot rocks! This is an awesome idea and I can’t wait to see how it turns out. Doug loves to explore different styles and sometimes works off of a particular theme when making his beer. Always expect to see new and interesting options on the tasting menu.

You may notice the lack of IPAs being offered at Broken Dreams. This is because Doug likes to leave those to other people, preferring to make more malt focused beers. Working with a smaller system, he is not afraid to play with ingredients. For example, every Friday the 13th he makes a new experimental batch to serve up in the tasting room. Recipes are occasionally tweaked and Doug is still on a quest to discover his favorite beer. 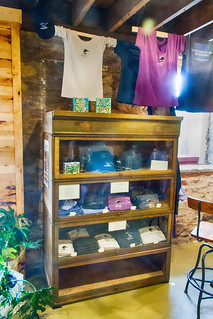 Broken Dreams supplies its beer to local restaurants and a few nearby breweries as well. The most popular beer in restaurants is Old Antics; yet at the tasting room, Floating Leaf comes out on top. The brewery also serves cider made by Bellwether Hard Cider on Cayuga Lake. Local maple syrup and honey are also available to purchase and take home. Sample flights of four choices cost $3.00 but specialty beers may cost a bit more.

I am so glad we finally made our way down to The Brewery of Broken Dreams. If we had more time, I would have hung out for a bit to enjoy a pint and a round of cards. There are some truly unique and interesting beers being made here and it makes for an excellent stop while exploring Keuka Lake. If you are quiet enough, maybe you will hear the call of the loons!

I was pleasantly surprised to learn that loons are sometimes spotted in the Finger Lakes. While more common in the Adirondacks, they tend to be seen in this region during their seasonal migrations. Apparently, they sometimes stay all winter if the lakes aren’t completely frozen. I will definitely need to keep my eyes, and ears, peeled the next time I am out on the water in the hopes of seeing the loons!

The Brewery of Broken Dreams 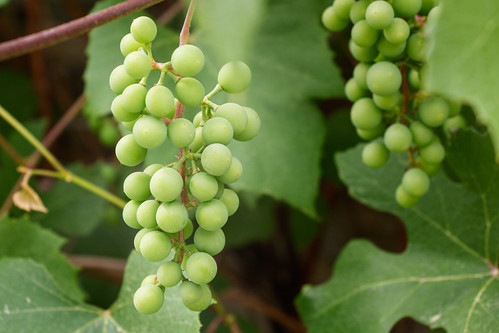 1 thought on “The Brewery of Broken Dreams, Hammondsport, NY”