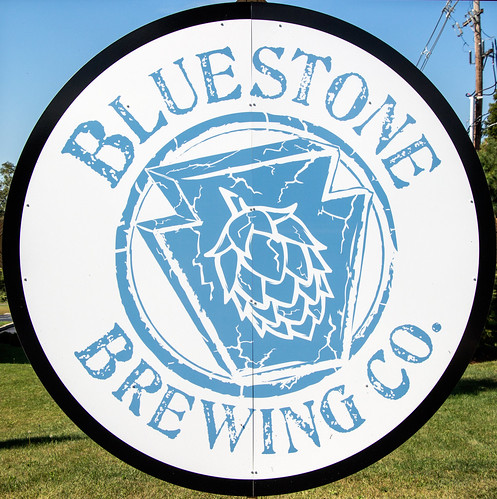 While on a recent trip to the Southern Tier region of New York, we made a small hop over the state line to check out one of the area’s newest breweries, Bluestone Brewing Company. Having been open for almost a year at the time of our visit, we wanted to see what kind of interesting concoctions Bluestone was brewing for its customers.

Walking up to Bluestone Brewing Company, we were very impressed by the building itself. Local Pennsylvania bluestone was used extensively in the construction, and I appreciate the small details such as the antler light located outside the main entrance. Around back behind the grain silo there is plenty of outdoor seating for when it is too nice to be stuck inside. Once at the tasting bar, we were met by PJ Kennedy, one of the owners of Bluestone. He took us on a guided tasting of the many beers, as well as the house-made soda, that the brewery had on tap. 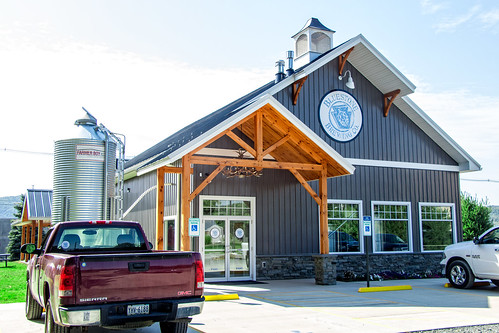 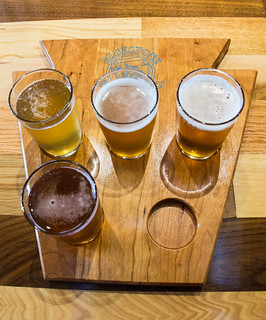 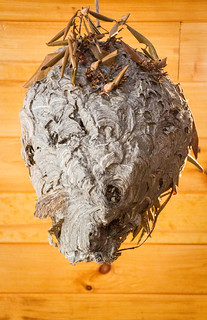 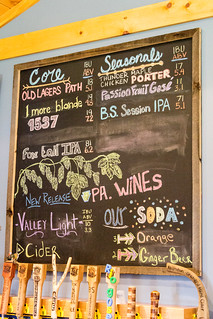 After going through a tasting of the beverages on tap, I was delighted by the diversity of flavors being offered. While some, such as the gose, were a bit more peculiar for the style, the fact that Bluestone isn’t afraid to try various techniques impressed me as it means there will always be something new and interesting to try. While I was hoping to enjoy some darker, heavier beers, they were unavailable at the time. However, the Thunder Chicken Maple Porter was a great example of what they could create as a lighter, more spring style porter. The other porter they produce contains honey that is donated by a local farmer. 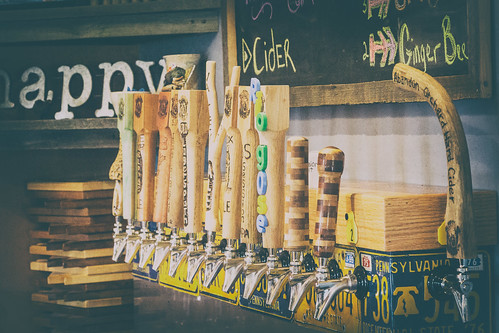 Head brewer, Thad York, originally began brewing over twenty years ago at home and was excited to ramp up many of his recipes to produce on a larger system. At Bluestone, Thad works with an all stainless steel ten barrel system. He intends to bring his smaller system from home to the brewery to help produce some of the more experimental batches of beer. Thad is impressed with the hard water available locally for brewing the beer. He likes the flavor and texture that it imparts in his finished products. When finishing up his beer, Thad does not filter anything, instead relying on a three day cold crash. His opinion is that too much filtering changes the flavor of the beer in ways that he does not want. Thad’s brother Jarrod is the head brewer over at Yorkholo Brewing Company which is well known for making high quality beer in small batches. 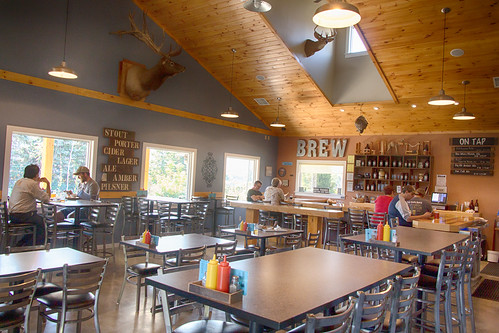 Thad prefers drinking Pilsners and Ales reminiscent of what he enjoyed while growing up; however the flagship beer at Bluestone is the 1537 Imperial Blonde Ale. He is on the sixth version of this beer and is quite proud of it. Not only is it their first beer produced, but it’s also Bluestone’s most popular. In case you were wondering, 1537 is the official serial number of the brew house. I also had to ask about the meaning behind the naming of Thunder Chicken Maple Porter. Thad is a hunter and the end of maple syrup season marks the start of the spring turkey hunting season. Apparently, when it thunders, you can hear the turkeys making gobbling sounds out in the woods! 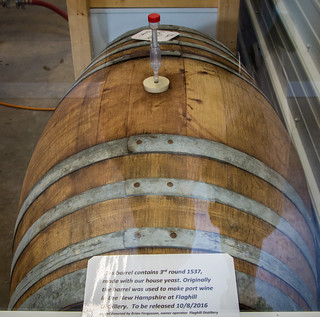 While visiting the brewery, Thad gave us the chance to try the Imperial Blonde Ale which has been aging in a port wine cask from Flaghill Distillery, in Lee, New Hampshire. At the time of our visit, it was running a hefty 14.5% ABV and he hoped it would be ready in time for their anniversary party. The beer had a heavy warm alcohol and woodsy aroma, however was still light and very drinkable considering the higher alcohol content. I would love to have seen how the finished product turned out. We also got a sneak preview of Thad’s Oktoberfest, which came in at 5.5% ABV. It had a pure malt forwardness that reminded me of many traditional Märzen style beers I have tried.

Thad also likes to experiment with ciders. He isn’t looking to make anything too sweet and produces small batches in the crates outside the brewery. This allows him to legally produce cider since it is not actually crafted within the brewery itself. Thad does not add sugar or additives to his cider and uses local apple varietals when possible. Occasionally he uses the fermenters to produce beverages with other fruits as well. Down the road, Thad is thinking about creating a house wine as their liquor license allows them to do so. I applaud his efforts to try producing a diverse range of beverages and will have to stop back to see what he comes up with. 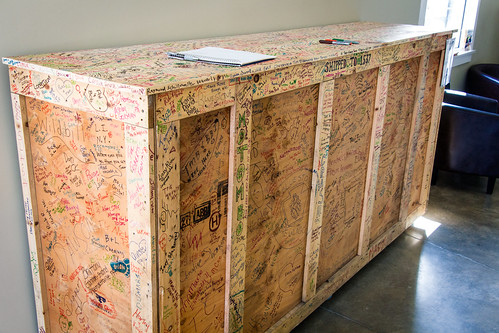 Interestingly enough, the soda has been very well received at the brewery. The flavors used in the process are made by hand in California using all natural ingredients. Bluestone is planning on expanding the soda line as there has been an increased demand for the non-alcoholic options. PJ said they wanted to make soda after they saw how popular it was at Ithaca Brewing Company. The sodas that Bluestone produces are unique and worth checking out if you are looking for some non-alcoholic alternatives involving craft brewing.

While talking to PJ about the brewery I learned that he and his brother Brian, another owner, constructed the building themselves. They are both contractors and wanted to create a location using as much locally sourced material as possible and to create a space that allowed for future brewery growth and restaurant space for the customers. The bar itself is made from six different varieties of Pennsylvania hardwoods. Be sure to ask to look at the book kept behind the counter as it includes lots of photos showing the progression in construction of the brewery. 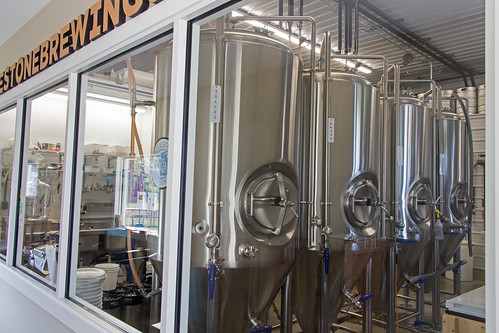 PJ makes sure they have lots of events for visitors such as cornhole tournaments, concerts, and yoga. Since the brewery does not produce wine yet, Bluestone stocks many local Pennsylvania wines to supplement the beer and soda that is available. The food menu consists of a decent selection of standard pub fare, including many sandwich and burger options. At the time of our visit, the lunch crowd was streaming in and before we knew it, the brewery was quite busy. 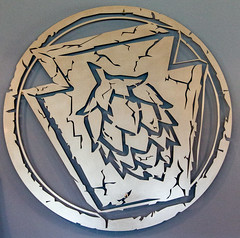 If you want to try a variety of beers that Bluestone has to offer, a sample flight of five will cost ten dollars. The beer is also available in growlers or grumblers, along with an assortment of hats, shirts, and even soaps made using their beer. I was really impressed by the beautiful handmade growler holders that were on sale.

Bluestone Brewing Company is a pleasant stop while driving along I-86 in the southern tier region of New York. Located right next to a hotel, the brewery is sure to pick up many fans from those that are travelling through the area and looking to have some local beverages close to where they are staying. Thad is quite ambitious and eager to experiment with not only other beer styles, but wine, and cider as well. It also doesn’t hurt that the non-alcoholic soda made on site is top-notch. I look forward to getting back to Bluestone the next time I pass through the area. 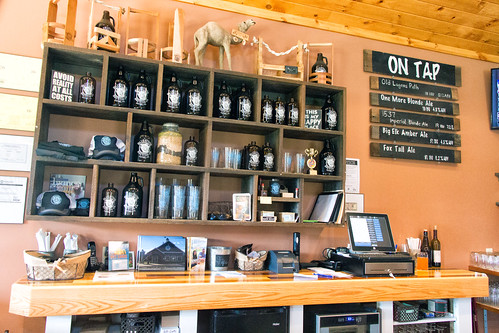 Since bluestone slate is such a key component to the brewery, I thought I would share more information about it. Pennsylvania bluestone is found only in northeastern Pennsylvania, northern New Jersey, and the southern tier of New York. It was formed over 360,000,000 years ago during the Devonian period and is composed of feldspar, sand, and mica. A beautiful example of this bluestone can be seen at Opus 40, in Saugerties, NY. This environmental sculpture is composed completely of bluestone from a local quarry and covers 6.5 acres! You can check out photos of the complex here in my photo gallery. 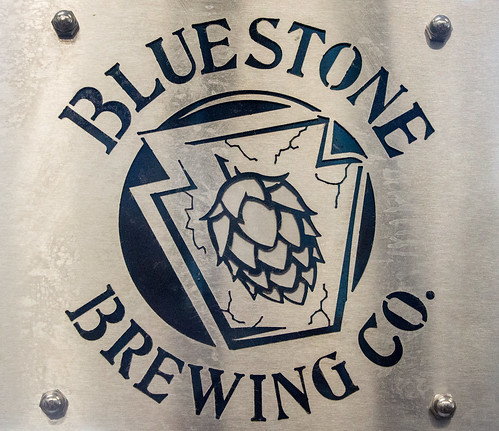