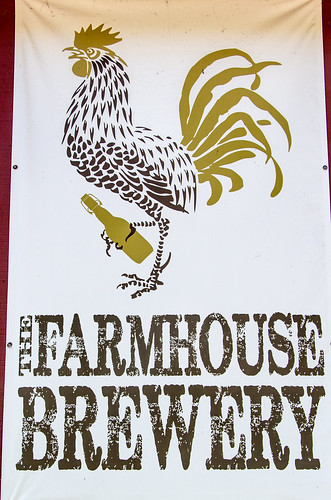 I’ve said this before, and will probably say it again, but the annual craft beer fest, TAP NY, is a great way to discover breweries across New York State that are producing unique and delicious beverages. One brewery that stands out to me year after year is The FarmHouse Brewery, located in Owego, NY. I finally had time to visit them and spent an afternoon trying their incredibly diverse lineup of beers.

The FarmHouse Brewery is located in a large red building, almost like a one level barn. When we arrived, people were already waiting outside to get in. As luck would have it, we managed to visit during a special event, their Day of the Darks. Being a lover of dark beer, I was excited at the notion of having an even larger selection to choose from. The tasting room itself is quaint, with many tchotchkes befitting of the farmhouse theme. We soon discovered that they had 21 taps for both their beer and soda, including a few guest taps! With plenty of time to spare, we took in the atmosphere and talked to the staff while trying the gamut of styles currently available. 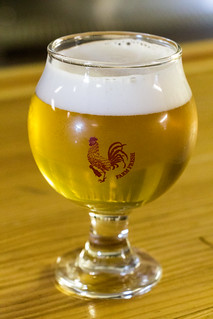 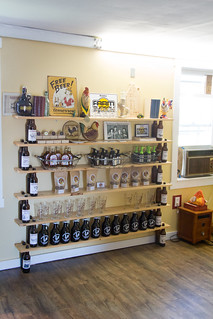 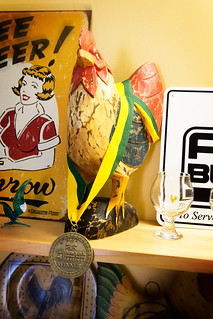 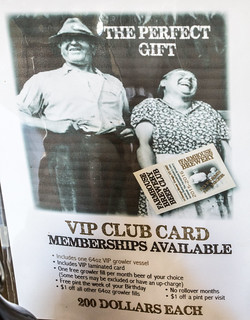 As you can see, their breadth of styles is all across the board, ranging from traditional wheat beers to eclectic wild beers such as the cucumber Gose! The FarmHouse Brewery realizes that many people want to experience this kaleidoscope of flavor and offers the Taste of the FarmHouse flight, which includes everything they produce for only fifteen dollars. This is an incredible deal and is quite possibly the most value packed tasting of any brewery I have been to. 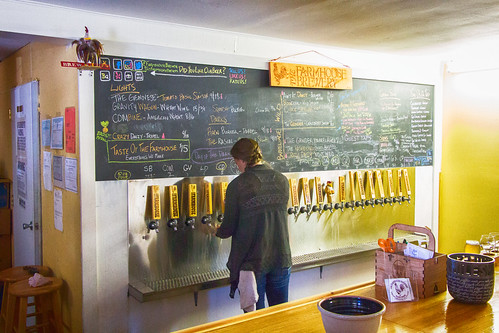 While tasting our way through the sampling of beer, we had the pleasure of talking with Natalie Mattrazzo, who along with her husband Marty runs the brewery. While Marty is both the beer maker and maltster, Natalie takes care of everything else. During our visit, she filled us with fascinating stories about the brewery and managed to multi-task conversations with many customers at once, quite the Olympic feat as the tasting bar filled up with more and more people. Ironically enough, Natalie has Celiac disease and does not drink any of the beer herself. In her opinion, there is no such thing as a good gluten free beer, but still offers ideas to her husband for new and unique recipes. 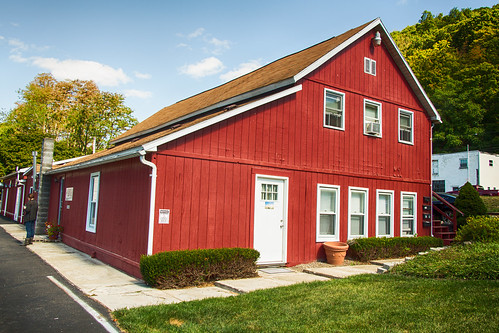 Natalie and Marty homebrewed for at least ten years before opening up the brewery. In 2011, Marty was part of an IT team at Coca Cola that got laid off. Wanting to open a brewery, he tried to convince Natalie, even writing up a full business plan, but she said no. Finally in 2012 after a full year of discussion, Natalie relented and Marty built a Malt house, FarmHouse Malt and Brewery over in York Valley. Marty spent two years perfecting the malt making process as well as his recipes before opening up the tasting room in Owego. Interestingly enough, York Valley is a dry town and a tasting room was not permitted there.  Having a farm brewing license, they are allowed up to five branch locations, so the opportunity to open more tasting rooms in the future is certainly a possibility. Most of the malt used at The FarmHouse Brewery is malted by Marty himself. While many farm breweries in New York State are still struggling to use an adequate supply of NY ingredients, they do not seem have that problem here. Just looking at the tasting menu, one can see how high a percentage of local ingredients are actually used in each beer.

Marty brews on a five barrel system and as Natalie says, “I don’t think Marty has slept since I met him.” Judging by the sheer diversity of beer produced, I can see why! He prefers to work with Belgians and doesn’t like making IPA’s, mostly because New York State based IPAs cost much more to make. However, he does tend to release a new IPA about once a quarter.  I did not have one disappointing beer in the entire flight. Each was unique and Marty does a great job crafting his Belgian beers. The current most popular beer is Crazy Daizy, a Belgian-style tripel that is deceptively easy to drink for having such a high ABV. It also won a Bronze medal at the 2016 TAP NY festival. 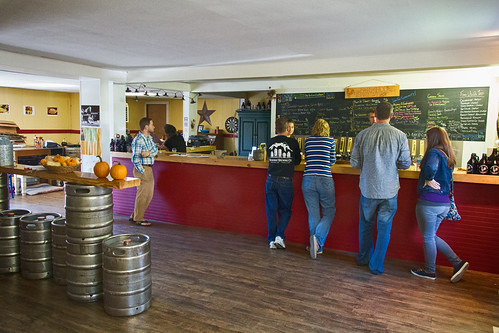 The tasting room is both dog and baby friendly.  Natalie always brings their dog to hang out there for the day and said that at one time there were even six dogs in the tasting room at once! An entertainment section includes a Nintendo Wii, board games, and a selection of toys for toddlers. If the kids do come with you, or you happen to not drink alcohol, the brewery also makes an assortment of non-alcoholic sodas. I liked them as they were not overly sweet or artificial tasting. 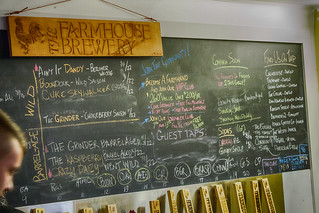 As stated previously, Natalie had so many incredibly interesting stories to tell about the brewery. One such tale dealt with the meaning behind the rooster pictured on their logo. Turns out the rooster had a name, Elvis. Elvis was destined for a farmer’s stewpot but Natalie rescued him and brought him home. Having no place to contain him she quickly built a rooster pen, but Elvis seemed to have a knack for escaping. Finally, on one such fateful excursion, Elvis met his demise in the form of a hawk.

Every beer is named with a particular story in mind. From visits with “Blind” Alpacas due to all the hair in front of their eyes, to having to tear down a beloved barn, every name has a meaning. I encourage you to visit the brewery and talk to Natalie about the various beer names as I cannot do justice to her way with words. Appropriately enough, farm animals seem to come into play quite often and make for unique tales while hanging out at the tasting bar. 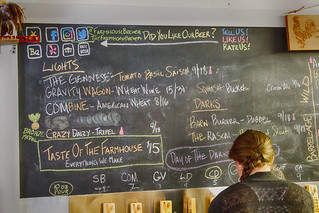 The brewery is involved with many local events such as the farmer’s market, and chili cook-offs. They are working to become an important part of the Owego community and from what I can see, they are quite successful at that. Everyone who walked in the door seemed to know Natalie and it seemed like a very friendly place for local folks to hang out. They even have the occasional live music event in the tasting room. You will most likely have to visit the brewery to purchase their beer as they currently only distribute as far north as Ithaca, NY. For those local to the area, a VIP club card is available which includes many perks like free growler fills and discounted pints. 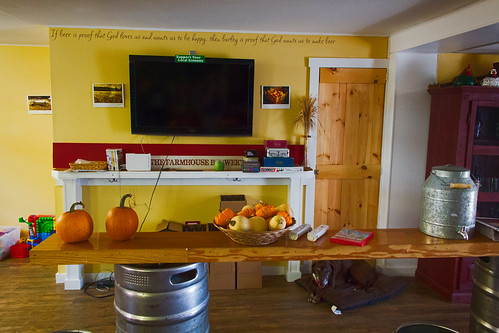 My only regret during our visit to The FarmHouse Brewery is that I had no empty growlers to take their beer home in. Luckily, the southern tier region of New York is not too far away and the brewery would make an excellent day trip. With such a diverse line-up of beer available, Marty always will have something unique and unusual to try. Stopping in at The FarmHouse is a great way to discover beer that is “farm fresh from ground to glass.”

Owego, NY was named after the Iroquois word Ahwaga, meaning “where the valley widens.” Budget Travel magazine’s readers named it The Coolest Small Town in the United States in 2009. If you are a history buff, head downtown and visit the Tioga County Historical Society, which contains local artifacts, artwork, and more dating back as far as the Civil War. 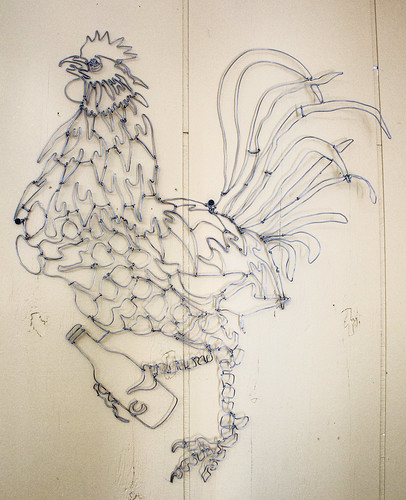