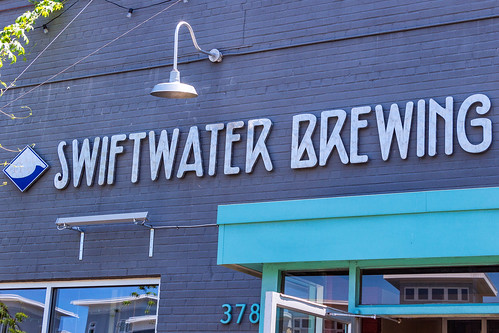 Finding some free time in our busy schedules, Tim and I wanted to post about another one of our favorite local breweries. Swiftwater Brewing Company, located in the South Wedge neighborhood of Rochester, NY, opened in early January of 2015. It is one of the local breweries that we have been patrons of since the beginning, and I was excited to have the opportunity to write about them for Liquid Alchemy. On a hot and sticky summer afternoon, we stopped in and had an in-depth conversation with Marina Christopher and Katie Nuber about what makes Swiftwater so unique in our area. 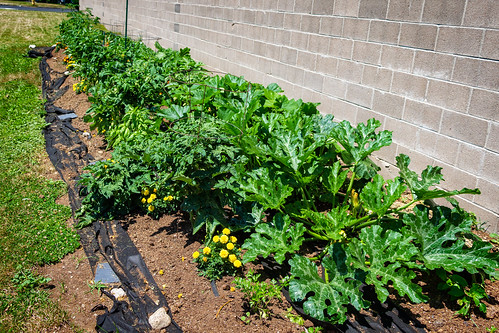 One of the first things you might notice about Swiftwater is the surprising number of gardens that surround the building, filled with herbs, vegetables, flowers, and hops. These gardens are a key component of what makes the brewery special. A large sliding-glass garage door allows access to a patio with plenty of picnic tables. Once inside the large open space, my eyes are always drawn to the long handcrafted wooden bar that separates the brewing equipment from the tasting room itself. At the bar, Katie put together an introductory flight of beer that she felt best represented the range of styles available. Below are the beers we sampled, with a few extras from later during our visit. 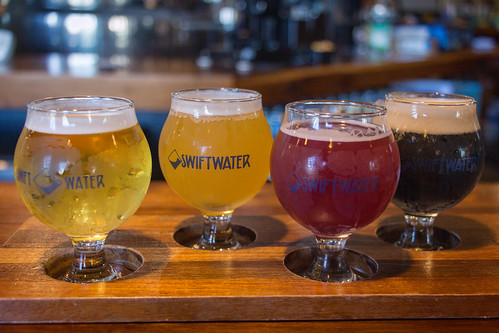 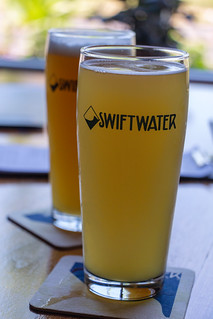 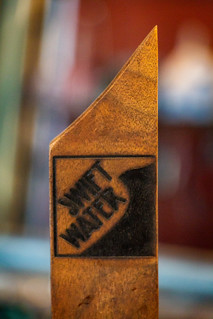 What I really appreciated about this flight, and the beers available in general at Swiftwater, is the large variety both in style and ABV. While some places choose to focus only on higher ABV beers or one particular style, such as IPAs, Swiftwater goes for a range that is sure to please everyone. Each beer is well-crafted, balanced, and full of flavor. One of my surprise favorites was the Swiftwater Beer. The low ABV was welcoming, and the crisp corn notes are a thirst quencher on a hot summer day. Swiftwater’s sours are also unique, and I enjoy trying new ones every time I come to the brewery. During our visit I could not pick out just one favorite beer, as they all offer something enjoyable and unique. The standard IPA and Hefeweizen were the current favorites among customers though this changes often as their line-up rotates. 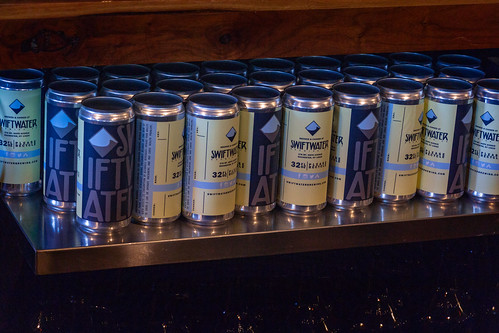 Marina Christopher, one of the shift managers at Swiftwater, was able to give us a rundown of the brewery’s history. Andy Cook, owner and head brewer, was a home-brewer and kayak instructor for many years before he had the idea of opening his own brewery in Rochester. His goal was to have an atmosphere of camaraderie that offered beer, food, and other spirits, all sourced from ingredients found throughout New York State. His family farm, Aurora Ridge, has been a key part of the business as not only do they supply much of the meat and produce used in the kitchen, but the gorgeous 70-foot-long black walnut bar came from their trees. Andy, along with his friends and family, put much sweat equity into building the brewery from the ground up. 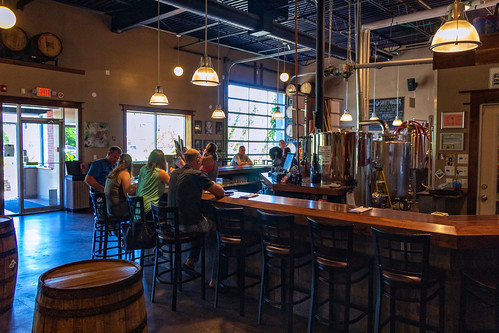 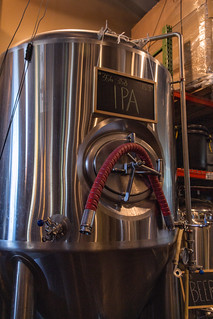 The brewery’s location was originally the home of a motorcycle escorting service before Andy got his hands on it. Walking into the brewery, the only thing that stands out from its previous history is the large garage door that goes out onto the patio, and even that was installed later by Andy as it had only been framed out. Little details, like the kayaks in the upper walls, reflect on his kayak instruction days and give the atmosphere a unique vibe. Andy works with two other brewers, Wyatt Kaidy and Hannah Trujillo, on a seven-barrel system. They just recently increased their capacity with one 20-barrel and three 28-barrel tanks and are excited about the future growth potential this gives them. As a NYS farm licensed brewery, they have to brew with higher percentages of in-state ingredients. Andy feels he gets a lot more control over the quality of malt used when he deals with local maltsters such as Pioneer Malting. Barley from his family’s farm has also made a critical contribution to some recipes such as the Governor’s IPA, which consists purely of New York State ingredients. Andy is extremely proud of the quality of this year’s batch. 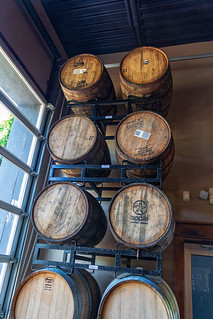 Marina told us how Swiftwater is trying to be as Eco-conscious and sustainable as possible. They compost and recycle almost every waste product, and try to reduce the intake of what they have coming in as well. The use of cloth napkins is indicative of their push to stay green, but the highlight is truly their vegetable gardens. Surrounding the brewery are vibrant gardens stocked with herbs, tomatoes, squash, and so much more. The kitchen chef makes sure to incorporate all the fresh produce in recipes that also feature other local dairy and meat farms. The breads and pretzels served daily are also made in-house. If you are looking for a quick low-cost addition to your beer flight, I highly recommend the roasted pumpkin seeds, supplied by Partyka Farms as they are both nutritious and delicious. For those that don’t care for beer, many local wines, ciders, distilled spirits, and non-alcoholic sodas are available for purchase. 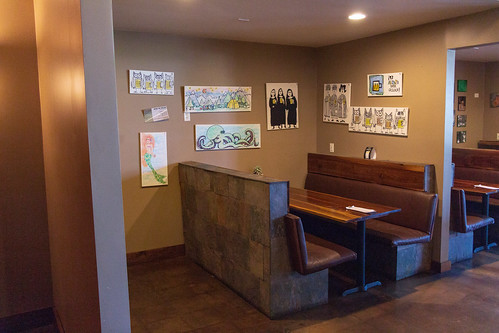 While Andy and his team love to produce many different styles of beer, one of the main interests is the production of sours. Right from the beginning, Andy wanted to have a sour on the menu, and they are always working on new recipes. Currently they have a barrel fermented series of sours called “Knowledge is Sour.” The latest offering is a Black Kriek, consisting of a barrel fermented black sour ale with cherries and vanilla added. Right before finishing this article I was able to get to the brewery to try it and was quite impressed. The complex and mature flavors in the finished product will excite your taste-buds. 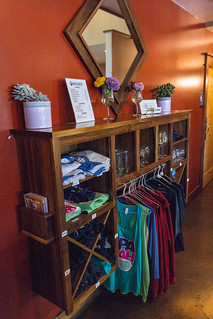 Swiftwater also understands that many people are glucose intolerant but still want to enjoy some beer. As such, at the end of the brewing process, a coagulant is added to the beer that extracts proteins and most gluten. The gluten reduced beers have created quite a loyal base of customers. This kind of execution helps make Swiftwater stand out from the crowd. While there is always room for improvement, most of the flagship beers see very minor tweaks these days in order to maintain the consistency and quality that Andy and his team are looking for.

What Marina most enjoys about working at Swiftwater is the sense of family. It has become a tight-nit community, and the camaraderie is felt not just by the staff, but by the local beer enthusiasts as well. They want to be an inviting environment and don’t want to be thought of as a party scene. Swiftwater feels there is room for all breweries within the Rochester region and believe that you shouldn’t talk down about your fellow brewers just to get ahead. Another way they keep connected to the local area is through participation in many community fundraisers, and working with groups such as the Rochester Deaf Rotary, the Pirate Toy Fund, and BASWA. 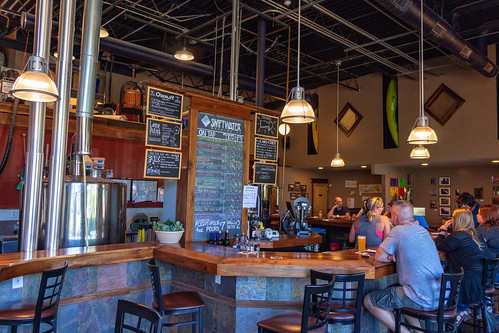 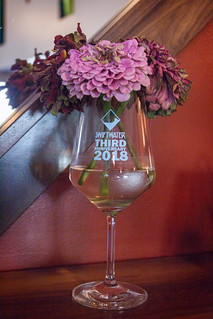 Depending on what night of the week you stop at Swiftwater, there always seems to be something going on. Currently on Thursday nights, the brewery runs a three-round trivia contest. These events are a lot of fun and they do a great job of coming up with unusual questions. It is also vinyl night, so be sure to bring in some records or listen to some of the collection they have. The brewery also plays host to the local home-brewers association meeting run by UNYHA once a month. Many local artists are represented on the walls, with all artwork available for purchase. Swiftwater branded apparel, glassware, and stickers are also sold at the brewery.

Since April of last year, Swiftwater has had their beer distributed by Remarkable Liquids. They have a small bottling line and use a mobile canning unit that comes through occasionally. Andy and his team are looking to branch out and increase their distribution throughout the region. Be sure to check out the artwork on the cans, it is truly beautiful. Jim Rosette is the graphic designer, as well as the wearer of many other hats at the brewery. I look forward to seeing more of his designs as Swiftwater continues to can. 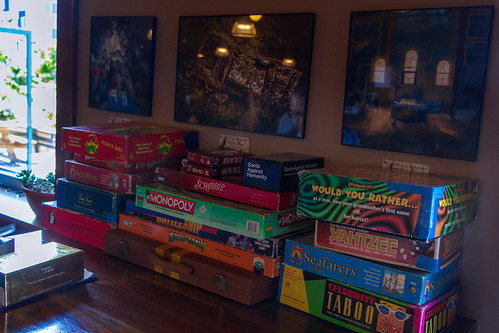 To go along with interesting artwork, many of the beers have unique names as well. For example, Alpaca Kisses, their New England-style IPA, was a name they came up with when trying to think of things that could be described as soft. Humulus Cumulus, another IPA, is the scientific wording for hop clouds and really rolls off the tongue when you say it.

We always have a good time when we visit Swiftwater. Whether we’re there for trivia night, or just hanging out playing games, the relaxed atmosphere lends itself well to good conversation among friends. There is always a wide range of beer to choose from, with plenty of solid offerings in the lower alcohol spectrum. I look forward to each of my visits and I’m excited to see what the future will bring. 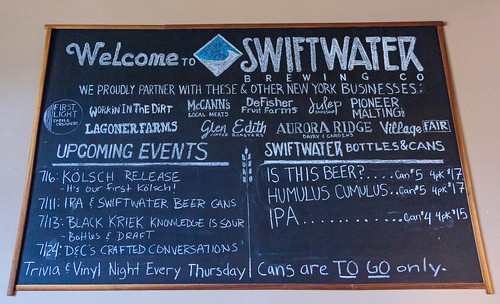 The South Wedge neighborhood consists of a triangle of land, with the Genesee River to the west, and the Erie Canal to the east. It is a thriving community with many eclectic shops and eateries. The oldest commercial building in Rochester was built here in 1822, and Frederick Douglas moved to South Ave in the 1860’s. This fast-growing urban neighborhood has a great sense of community and I urge you to explore some of the many other local businesses either before or after your visit to Swiftwater! 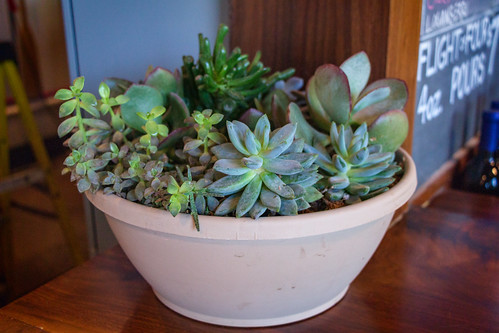